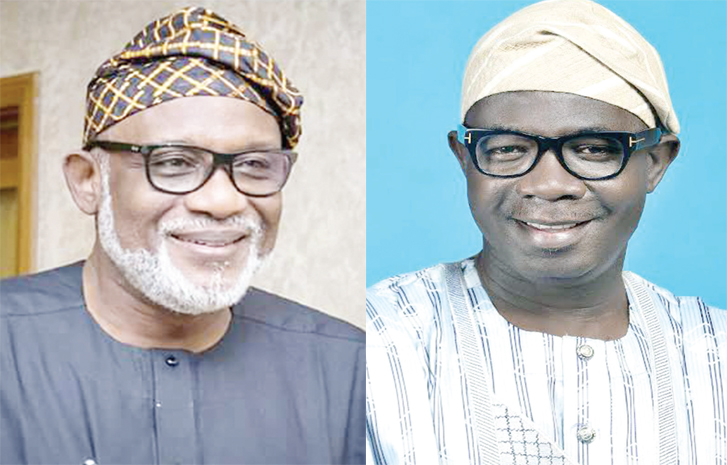 The battle between Governor Rotimi Akeredolu and his estranged deputy, Hon Agboola Ajayi got messier on Friday with the allegation that the governor collects N750 million monthly as security vote.

Ajayi said the governor also gets an imprest of about N150million.

However, Akeredolu, who is the All Progressive Congress candidate for the October 10 gubernatorial election described Ajayi as a liar.

Speaking through his Chief Press Secretary Segun Ajiboye, the governor said the brazen misinformation is not a surprise but a true reflection of the unstable and treacherous content in Ajayi.

The statement said that “the disclosure by Mr Governor that the governorship candidate of the Zenith Labour Party (ZLP) receives a monthly running grant of N13 million appears to have further emitted the entrenched character of the man in question, Agboola Ajayi.

“True to type, Ajayi has resorted to lies and fabrications that Mr Governor gets a monthly payment of N750m as security vote. This brazen misinformation is not a surprise but a true reflection of the unstable and treacherous content in Ajayi.

“The general public is urged to take advantage of the Freedom of Information Act to interrogate both statements by Mr Governor and Ajayi.

“For the avoidance of doubt, the State Bureaucracy which process such payments is very available to confirm the veracity or frivolity of either of the statements.

“The October 10 governorship election is between integrity and the absence of it.

“The patent greed which has provided motivation for the treachery and perfidy of Ajayi appears to have created further paths of dishonesty to oil his political misadventure. Succinctly, he is misled my his mind of greed.

The statement said that “By his antecedents, Agboola Ajayi would have wittingly provided evidence of the payment of such huge amount even before now if it was true.

On Thursday, the governor had flayed Ajayi for betraying him despite receiving N13m monthly which he said was the highest allocation received by any deputy governor in the country.

He said that “Agboola (Ajayi) does not want to wait for his time. I made him comfortable, I asked him to represent me in so many places but some people were warning me, I said they should leave him alone.

“No deputy governor has collected what he was collecting in the history of the state. I gave him N13 million monthly, his predecessors did not collect as much as that.

“No deputy governor collects as much as that in Nigeria. I gave him enough room to operate yet he betrayed me.