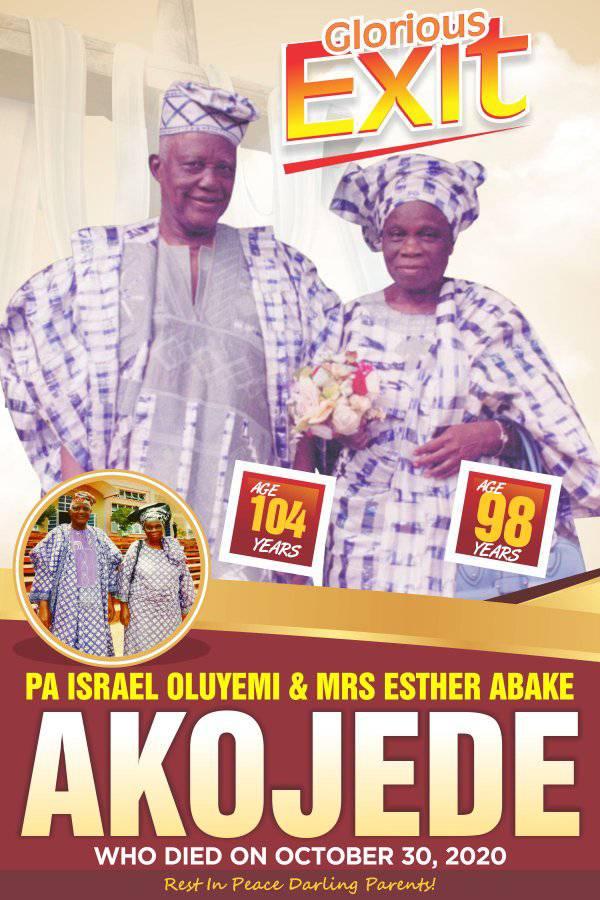 In what seemed a myth but a reality occurred at Abeokauta, Ogun, as Pa Israel Akojede and his wife, Mama Esther both died few hours apart having lived together in marriage for 72 years.

The News Agency of Nigeria (NAN) reports that their demise which occurred at Gbonagun Obantoko area of Abeokuta, had Pa Akojede reported dead around 3 a.m. on Friday, Oct. 30, while his beloved wife died a few hours later having got the news of her husband’s death.

The first son of the family aged 70, Mr Joseph Akojede, who confirmed the deaths, said that though the incident remained a mystery to the family, but that it was expected because of the fondness between them.

“Their death is shocking but also expected. What we are thinking is maybe there would have been a short interval because they both loved themselves dearly.

“I have watched them since I was young and I know they are inseparable, they wear same colour of clothes, have the same belief and always consulted each other for advice.

“You can hardly hear them grumbling against each other as mama will say whatever her husband did was final, she won’t give a second opinion even if she had any.

“Such was the love they shared. Papa died very early in the morning and as we were being careful about breaking the news to his wife, she already knew and few minutes later she gave up the ghost,’’ he said.

The first grandson of the family, Mr Olanrewaju Akojede of the News Agency of Nigeria (NAN), said the demise of the couple was a true version of the popular film, “Romeo and Juliet’’.

“I have watched them play Romeo and Juliet whenever I have the opportunity to be with them. It’s so surprising to me that they even shared the same mobile telephone.

“Whenever I call, it’s either Mama or Papa that answers the call; it depends on who the phone was with it when I called.

“They are so great parents who had lived a pleasant and worthy life that is worth emulating. May their souls rest in peace,’’ he said.

Their burial ceremony will be announced later by the family.

Why Wizkid’s New Album Is Being Called Trash