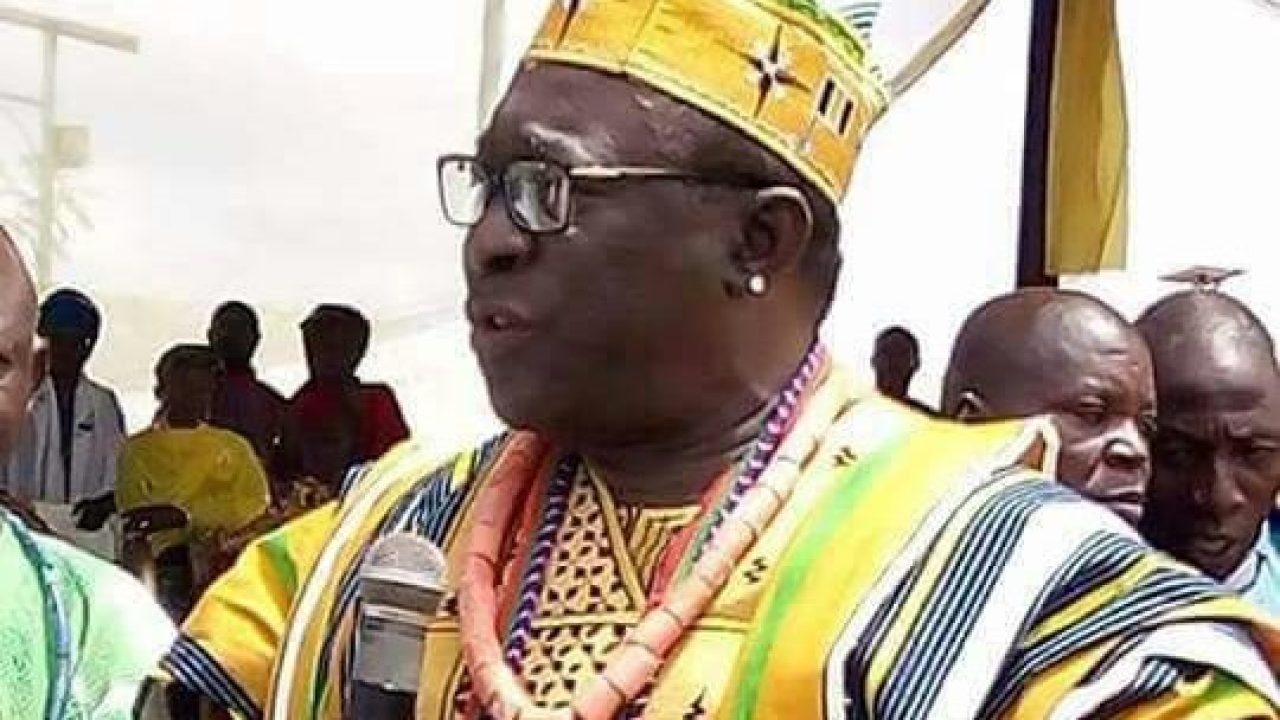 Notwithstanding the glory, reverence and extreme privilege bothering on deification that comes with ascending the throne of the Attah Igala, the contest for the stool has over time been devoid of the desperate, acrimonious, and cutthroat competition that is often associated with the tussle for royal stools in other lands.

The reason is not far-fetched. In the close to 700 years existence of the stool, kingmakers had always followed laid down traditional processes and procedures in arriving at who becomes the divine ruler of the Igala people.

The stool is to be rotated among four ruling families (houses) of the Ayegba Oma Idoko  Bloodline in the order of seniority.

To wit; Aj’Ameacho, Aj’Aku , Aj’Akogu and Aj’Ocholi. Thus after the reign of our one family, the next family to assume the throne is already known.  Again in each family there’s a preference for the eldest prince among the sons of the last person to occupy the stool granted that he’s screened and considered qualified and then presented by the Ruling House he belongs as their choice.

It is noteworthy that in the race for succession in the Kingdom, whatever modern religion a candidate professes neither counts for  nor against his chances. This is because it is assumed that the religion of the Attah is the worship of and communion with his forefathers. Beside he’s a divine priest-king.

This attitude of de-emphasizing religion as a factor of interaction has permeated the entire Igala nation up to political contests with religion never determining the fortune of a candidate.

Before the commencement of the in-house family screening process, The Achadu, who is the Prime Minister of the Kingdom at the completion of the rites of passage after the death of the Attah will declare the stool vacant.

The Ruling House in line is expected to immediately constitute what can be regarded as a screening committee under the headship of the oldest man in the House who will liaise with principal stakeholders of the extended family to interview and screen the eligible princes.

The choice of the House will then be presented to the three other Ruling Houses, who will then jointly present the candidate to the King Makers known as the IgalaMela Council headed by the Etemahi, a First Class traditional ruler.

In all likelihood, a candidate so presented is expected to become the next Attah Igala.

Spanner in the Works.

But there was a major deviation in recent history, when the British Colonial Administration in 1956 ignored the time tested process that had worked smoothly for over 600 years and turbaned a prince, Aliyu Obaje, whose Ruling House was not even in contention and escorted him to Idah, the Capital of Igala Kingdom to forcefully install as the Attah.

This was to all intent and purpose a coup d’etat executed by the British colonial power against the Igala Kingdom.  At the time, the rites of coronation of a new Attah in the person of Late Opaluwa Oguche had all but been concluded.

As a matter of fact he was only a few steps away from ascending the throne of his forefathers.

The colonial government was said to have included the requirement that whoever will be allowed to ascend the throne must have had some level of formal western education and decided that the Prince who best satisfied their requirements was the Late Aliyu Obaje.

It is believed that this interference may have been as a result of their frustrating experience with the then immediate past Attah Ameh Oboni who it was said resisted being subordinated to the powers and controls of the colonial administration’s indirect rule.

The Attah by that arrangement was subordinate to the Sultan of Sokoto who is the Chairman of the Northern House of Chiefs. Oboni who would take none of that was considered cantankerous and his intransigence adjudged to be as a result of his illiteracy.

After his deposition and eventual transition it was thus resolved that only an educated prince who understands and can recognize authority will be allowed to ascend the throne.

This development effectively threw spanners into the works with Opaluwa Oguche who was already an Attah in waiting rejecting the imposition and heading to court. This was the first time the contest for the stool would assume such belligerent dimension.

He was equally trenchant in trying to undermine the reign of Aliyu Obaje for years until a reconciliation was finally achieved through the efforts of the stakeholders of the Kingdom in 1972 when Oguche withdrew his suit from the Supreme Court and returned to his pre-nomination position as the District Head of Ugwalawo.

Though Oguche succumbed to the pressures to let peace reign, the distortions introduced by the anomaly of imposing a turbaned Attah against tradition has continued to endure.

For instance the contest that brought in the departing Attah, His Royal Majesty, Idakwo Oboni for the first became a free for all among the four ruling houses with each of the clans presenting candidates, in some cases some individuals even made independent bids for the stool.

When eventually Idakwo Oboni of the Aj’Ocholi Ruling House was chosen on the grounds that his direct father had occupied the throne (which is a requirement), at least two ruling houses: the Ah’Ameacho who produced Opaluwa Oguche (the Attah in waiting that was supplanted by the British) and the Aj’Akogu whose turn was also compromised by development were unhappy and were believed to be spoiling for a judicial showdown.

The Law that Restored Sanity.

However then Governor in Office Captain Idris Ichalla Wada deftly saved the situation with the enactment of Igala Area Traditional Council (Modification of   Native Law and Customs) Order, 2015 Procedure and Regulation for the Ascension to the Stool of the Attah Igala Act.

The law amended the tradition that restricts succession only to the direct sons of persons who had occupied the stool. To sustain the tradition would have meant that the Aj’Ameacho and the Aj’Akogu would have expired as ruling houses as a result of the injustice of the British in 1956. The law equally prescribes that the restoration of the rotation will commence from the Aj’Ameacho.

The law now qualifies grandsons and nephews and grandnephews of an Attah to be eligible where there are no more direct sons. This was to cure the injustice against the two ruling houses whose last Attahs were Oguche Akpa of Aj’Ameacho House, (father of Opaluwa Oguche) who reigned from 1911 to 1919 and Atabo Ijomi who ruled from 1919 to 1926. No direct sons of these Attah’s are still alive after  a century of their departure.

The Wada Law has effectively doused the tension. With the rites of passage of the last Attah Agabaidu Michael Idakwo Oboni over, the Aj’Ameacho Ruling House, has been deliberating to pick its best among the qualified contenders.

Already in the spirit of unity and submission to higher family interests that had hitherto characterized the contest some major contenders like Professor Armstrong Idachaba, Harvard trained intellectual , Professor of Mass Communication and presently the Acting DG of the National Broadcasting Commission (NBC) have against pressures and popular demand to participate withdrawn from the contest to give the direct sons of late Opaluwa Oguche , the Attah that was halted on his way to ascension, the privilege to vie.

There are speculations that each of the two sons of late Aliyu Obaje, the late King who was imposed by the British in 1956 are also individually interested in the contest and may be lobbying for the Wada Law to be jettisoned. This cannot be independently verified but many fear that such a predacious ambition at a time when the Igala Nation is reveling in the return of order and sanity to the succession process could force a review of the legitimacy of their father’s reign as Attah having never been subjected to any of the rites required of an Igala King of the Ayegba Oma Idoko Dynasty.

Others are Wada Adaji Oguche, a successful businessman and Dr Mike Idachaba an American trained scientist. The last two have withdrawn just like NBC’s Prof. Idachaba based on the consensus to allow the direct offspring of Opaluwa Oguche who was unjustly supplanted to remedy the injustice to their late father.

Each of the contenders of the Aj’Ameacho House are considered qualified but it is expected that the Kingmakers will equally consider the sentiments and desire of the people of the Kingdom for an agile and virile candidate capable and competent to handle the office in a manner that the interest of the Kingdom will be well protected.

However, Samuel Opaluwa the former  staff of the Central Bank would appear to be the favourite as James Ufaruna the eldest son has withdrawn from the contest and endorsed Samuel. The endorsement is considered a submission of his right of ascension to his younger brother. Thus this now effectively leaves three of the Opaluwa Princes in the race. Samuel, Mathew Alhaji and Ocholi.

All attention has therefore shifted to Aj’Ameacho Ruling House to know the choice of the family. Barring any last-minute hitch, the successful prince among the contenders will be declared in a matter of days.