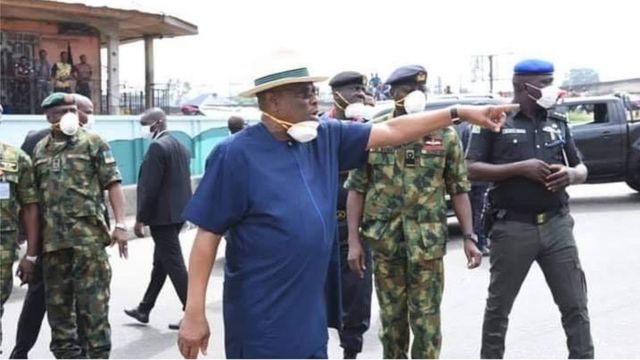 Rivers State Governor, Nyesom Ezenwo Wike, says two kingpins of the proscribed Indigenous Peoples of Biafra (IPOB) involved in the killing of six soldiers and four policemen in Oyigbo, have been arrested by security operatives.

He has also maintained that the imposition of curfew in Oyigbo Local Government Area helped to prevent an outbreak of inter-ethnic war between Igbo and Hausa communities in the area.

The Governor stated this when Rotary District 9141 Governor, Mrs Virginia Major led a delegation of Rotarians on a courtesy visit at the Government House, Port Harcourt on Tuesday.

He revealed that security operatives in late hours of yesterday arrested two prominent members of IPOB in Oyigbo.

Governor Wike explained that Rivers State was peaceful during the EndSARS protest, until criminals, under the guise of IPOB attempted to paint the State black by killing ten security agents in Oyigbo.

He noted that while Rivers State has been home to every ethnic and religious groups, some misguided IPOB members, had taken  this for granted by unleashing mayhem in Oyigbo and even attempted to cause inter-ethnic war.

“If we did not take the steps we took by imposing curfew in Oyigbo, today, it would have been the Hausa and Igbo that will have been fighting and nobody knows what level it would have taken today” he said.

The Governor said though he has had frosty relationship with Nigerian Army and the Police, he will, however, never tolerate the killing of any solider or police in the State.

He urged those spreading falsehood that Igbo people are being killed and punished in Oyigbo to be dispassionate when acts of criminality are committed. According to him, if IPOB members did not kill people and destroyed properties, Government will have had any justification to declare curfew in the council.

District 9141 Governor, Virginia Major, lauded Governor Wike for the manner he handled the well intentioned EndSARS protect, which was almost hijacked by miscreants.

She noted that while the world was facing COVID-19 pandemic of unimaginable proportions, Governor Wike and his colleagues and the Federal Government did not relent in their collective efforts to support polio immunisation at all levels.