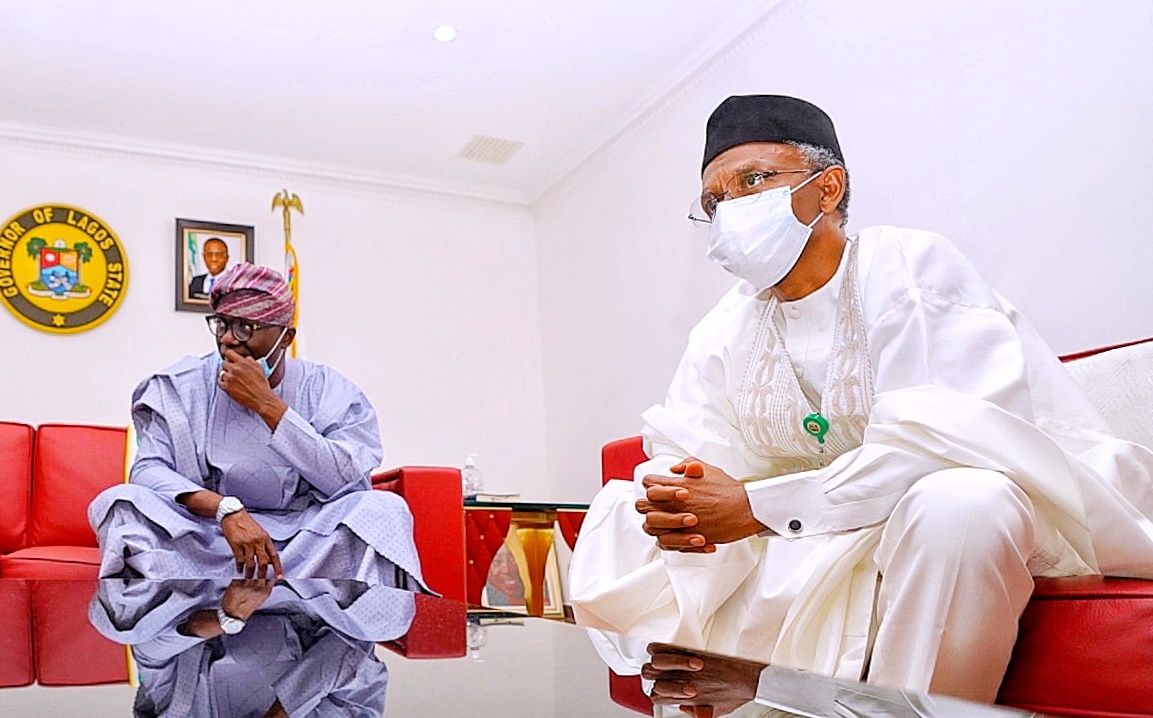 The visit of Governor Nasir El-Rufai to Governor Babajide Sanwo-Olu on Thursday was remarkable. The sympathy visit was despite the well-known political differences between the two leaderships of the All Progressives Congress, APC in Lagos and Kaduna.

Significantly, it came days after Mallam hosted one of Asiwaju Bola Tinubu’s most notable Southwest political rivals, Dr. Kayode Fayemi with pomp at the 50th anniversary of Arewa House.

Mallam was quoted at that occasion to have described Dr. Fayemi as someone the north loves and could do business with!

Mallam’s opposite disposition towards Asiwaju had earlier been projected during Ogbeni Rauf Aregbesola’s 60th birthday anniversary when the Kaduna governor was quoted to have said:

Mallam who has won a reputation of not cowing to many people had indeed been credited with even more acerbic assertions against the Tinubu tendency.

At a forum organized by the Bridge Club in Lagos in May, 2019, Mallam had tutored his audience on how to defeat the Lagos godfather! He said that he had successfully retired the three he met in Kaduna and charged his listeners comprising a section of the political elite in Lagos that the same could be done in Lagos!

So, given this background, his sympathy visit to Lagos was bound to have elicited some measure of interest. It especially did for your correspondent.

Besides the fact that he hosted Fayemi to a rousing reception in Kaduna last weekend, the political landscape was fired at the beginning of the week with reports of the pasting of Rotimi Amaechi-Nasir El-Rufai 2023 presidential posters in Abuja.

Of course, few would believe that the posters emanated from either Amaechi or Mallam. But the question in many minds is why is it that El-Rufai is always almost always paired with Tinubu’s political rivals?

Amaechi who he was paired with in the campaign poster is another political war-horse that has been reported to have been on the wrong side of the Tinubu camp.

Whether true or not, the story is that Amaechi and Bukola Saraki were the ones who worked against Asiwaju’s emergence as running mate to Muhammadu Buhari in 2015.

While Saraki did not survive the backlash within the APC, Amaechi scaled through and continues to scale through though with bruises now and again in Rivers State.

Indeed, Amaechi, El-Rufai and Fayemi were all mentioned in one way or the other in the removal of Asiwaju’s man, Comrade Adams Oshiomhole as national chairman of the APC.

In fact, so bitter was an Asiwaju apologist about the Oshiomhole matter that he announced on TVC after the Edo election that there was celebration in the Ekiti State Government House when it was announced that Godwin Obaseki won the governorship election.

How Mallam reacted to the Edo election is not known. But almost everyone knows the position of his ally and director-general of the Progressive Governors Forum, Comrade Salihu Lukman.

So, when it was reported that Mallam visited with Governor Sanwo-Olu to sympathise with him over the recent riots in Lagos, it underlined the extent of the devastation during the riots.

In fact, for someone who some critics claim has carried out his public service duties with little empathy, El-Rufai’s visit must have been touching.

It was even more moving when it was reported that Mallam was quoted to have said that he nearly cried when he saw what happened to Lagos.

However, Mallam’s many critics on Twitter were also quick to add that the kind of empathy he showed in Lagos was not demonstrated at home where he had been rightly or wrongly blamed for not showing empathy towards the killings in Southern Kaduna.

El-Rufai’s visit to Lagos was understandably beyond politics and was on the surface meant to show the solidarity of Kaduna, the capital of Northern Nigeria with the nation’s commercial capital in time of sorrow.

However, being political actors, his movement could not be separated from his past and future political actions.

First, your correspondent imagined and almost put a call to Muyiwa Adekeye to find out if the team also visited with Tinubu. If not, then on his personal losses from the protest.

Indeed, it was also poignant that the two major aides that came with Mallam to Lagos, Adekeye and Jimi Lawal are Yoruba.

Jimi Lawal, a former banker and Adekeye are also famously members of the Kaduna cabal, underlining the reputation many think of El-Rufai as one inspired by merit in his appointments.

The El-Rufai government’s inclination to good governance as underpinned by budget discipline, the urban renewal projects that have changed the face of Kaduna and the deliberate empowerment of capable youths have been commended near and far.

El-Rufai is one of very few governors who attach portfolios to commissioner nominations.

But how in his second term as governor, Christians and the people of Southern Kaduna have seen a different picture of Mallam is one that blows the mind.

One former Kaduna resident described the governor as perhaps being insensitive to his political environment. Perhaps that was before. The commencement of the Kafanchan Urban Renewal project must have calmed those comments.

It is soothing that Mallam is reaching out. If not for himself, then for somebody that can replicate his good governance gradient in Kaduna on a national level.