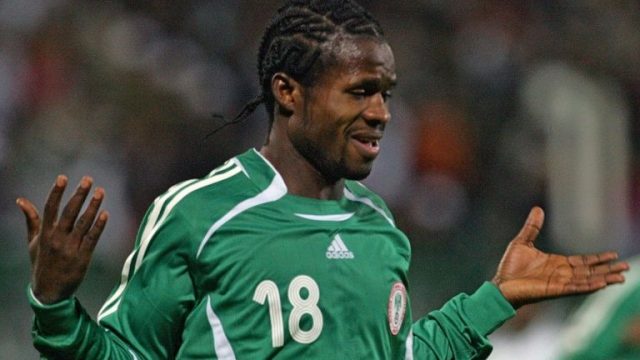 Popular football blogging site, Goal.com caused controversy on social media as it became a platform for other Africans to hit at Nigeria and Nigerians over the abduction of former Super Eagles midfielder, Christian Obodo.

GWG recalls that the police had disclosed that the former Udinese man was not ‘kidnapped’ but robbed as he was taken to an Automated Teller Machine (ATM) where he was forced to withdraw money for the bandits.

However, Goal.com had a different narrative to the story as the football site stated that Obodo was kidnapped over the loss of Super Eagles bets in Nigeria’s home game to Sierra Leone.

According to the platform, angry fans who had made bets, were disappointed with the Super Eagles home draw with Sierra Leone last Friday and abducted the former midfielder to compensate for their losses.

The assertion stirred controversy on Goal.Com as many commentators from other African countries used the opportunity to attack the West African giants over the issue. Nigerians also fired back in defence of their country even as they recognized their problem with leadership.

Likobili Linho Henry wrote: “They are best at kidnapping !!!!! I think they don’t understand the word coming from behind in a game of football.”

a NIGERIAN, Olusoji Adediran  replied, Henry saying, “And your country is damn poor with bad leaders and yo fond of terrorising other Africa countries.”

Likobili Linho Henry responded, “yes we are poor but we don’t have kidnappers & we live free with a little we have.”

William Maranga attacked Adeniran saying, “So Nigeria got good leaders and its rich? Why cry of Sars and Buhari?”

Olusoji Adediran replying Maranga, who is from Kenya  wrote: ” Shut up…it’s observed that kenya bribery and nepotism as most prevalent form of corruption according to survey carried out. July 2019 Kenya’s finance minister became the country’s first sitting minister to be arrested for corruption.”

Ajuwon Oladapo wrote: “William Maranga We are all Africans and let us all share the African heritage…… Am also a Nigerian….. let us love one another and let us stop all forms of abuse…. thanks for your understanding.”

Also, a Nigerian took the opportunity to state that Nigerians are doing well in America as they are the most educated immigrants and three Nigerians were elected in the just concluded US elections.

Tunde Ajadi,  wrote: “The USA. Nigerians are the most educated immigrants there, and they contribute greatly to all the part of the country’s sectors In addition, three Nigerians won seats in the just concluded election in US.

Fabian Obinna wrote: “A Malawian talking, at least it is not something to hide that Nigeria got bad leaders and there’s nowhere bad things don’t happen in the world, even with the bad state Nigeria is.. Malawi doesn’t exist and some South Africans too making fun of.”

Dada Simileoluwa Tosin wrote: “The hates on Nigerians from other Africans are too much. Anyways there is no country in Africa without nemesis.”

Mrcool Nicetowatch wrote: “I heard that being a drug dealer a scammer and a kidnapper it a profession in Nigeria, do you even got a academies for those staff?”

Sierra Leone Vs Nigeria: Rohr Gives Another Excuse For One More Bad Outing