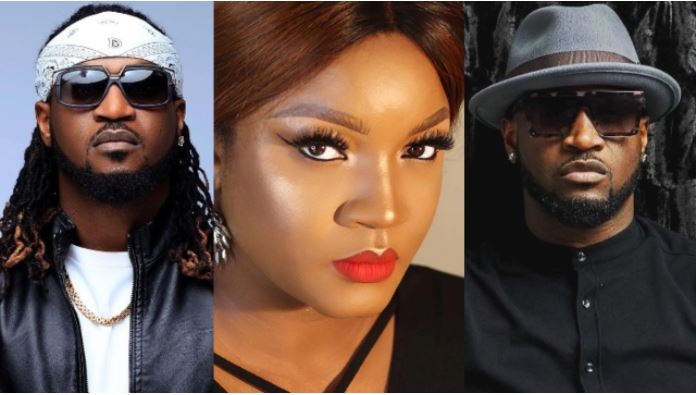 She came under fire for celebrating only one of the twins, Peter and forgetting the other brother, Paul who is Peter’s twin brother and shares the same birthday with him.

GWG reported  twins who used to be a group called P-Square parted ways in 2016 and are still at loggerheads.

Omosexy had posted Peter’s photo alone on the occasion of their 39th birthday .

She said: “Happy birthday to a great friend. @peterpsquare . Almost missed your day! Wishing you a day as happy as you. Can’t wait for your session @teffestofficial .”

But her comment did not go well with Nigerians as they blamed  her for not being nice to the other twin  Paul known RudeBoy .

Those who reacted said that the 42 year old actress was adding more to the problem considering the fact that the twins are not in good terms.

See some of their comments.

nurse__annie wrote “This woman just they make me lose respect for her more. Abeg make I unfollow”

nonye.okeke.7 wrote “Are u suppossed to be separating them even more. Na wah oo”

prime_official1 wrote “This lady you too dey behave like small pikin.. GROW UP ABEG”

tutu_berry01 wrote “Na wah o. He has a twin brother….. Because this one is your Friend doesn’t necessarily mean u can’t wish Dem both.”

rediva.waistshaperz wrote “Anti omotola this one isn’t nice o,they are twins and just cos one is your friend doesn’t mean you shouldn’t wish them both..Not cool at all!”

jaypofficial24 wrote “They are twins please, let love lead no discrimination and let no man put asunder what God put together”

may25058 wrote “This doesn’t make sense at all.If you can’t post the both of them,then don’t post anyone”