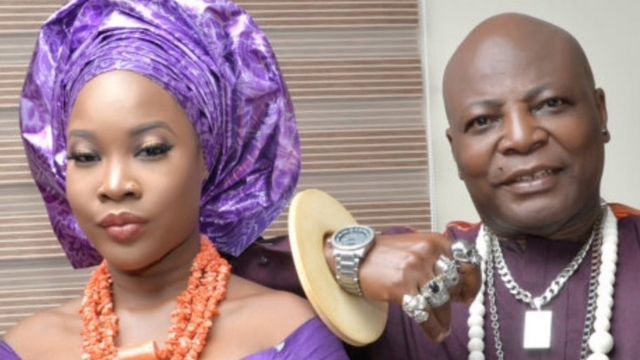 GWG reports that the singer had taken to his Instagram page on Friday to say how he found difficult accepting his daughter as a lesbian but that he later braced up to the challenge and accepted her for who she is.

According to Charly Boy, Dewy will always be his princess.

In a swift reaction. Dewy took to her Instagram page berating her father and calling him a hypocrite. According to her, her father threw her out of the house after she revealed her homosexuality and did not bother about her.

Dewy stated that Charly Boy only wrote what he wrote to attract attention and gain clouth.

She wrote: “Gaslighting at its finest. It’s quite unfortunate that my life is nothing but content. I just can’t wrap my head around the hypocrisy.

“All this for a drop of clout, attention and praise from strangers just to feed your ego.

“Honestly I was going to just free this situation because I’m used to this toxicity and mentally I’m tired but after seeing this i can’t stomach this pretentious behaviour anymore because on a normal level this man no Dey even pick my call.

“2017 I got kicked out of the house and was damn near homeless and if not for my friend I wouldn’t have even had food or Shelter!

“Fortunately for me, I had a return ticket to come back to Atlanta, I moved back here with zero dollars not even knowing where I was going to live or where my next meal was going to come from!

“I was literally living couch to couch and lord knows how tirelessly I worked so I could have my own stability!

“You didn’t even know if your daughter was dead or alive anything could have happened to me.

“But on social media, you are the father of the year. You have literally put Instant gratification from strangers before your own blood.”

This development has sparked strong reactions on social media as some Nigerians took to the micro-blogging platform to berate the entertainer.

GWG brings some of their view below:

Fola@folasoasis wrote: “Charly boy didn’t expect his daughter to air him totally the way she did. that’s why he thought he could get away with this nonsense. so shameful.”

Afrikann@HypemanFC wrote: “The girl this Charly boy guy is even talking about is working in one of the top law firms in the country now and leaving her best life. She’s recognized in her field already. I even followed her series on how to get the best out of law school.”

Christopher Simpsons #ENDSARS!!@Ezeugonna_1 wrote: “Why won’t he accept her the way she became? After all late Justice Oputa accepted that clown the way he turned out. Just imagine that Charly boy came out of the almighty Justice Oputa’s loins?”

Nwaada oluchi #ENDSARSNOW@Ada_di_ora_mma wrote: “I really feel bad about this. It’s great you survived all that. That’s very low from a father. Those calling Paul Okoye names because of his outburst against Lola, this is what it feels like for someone not to rate you at all but use you to chase clout on social media. Charly Boy.”

THE ADA OWERRI@TheAdaaa wrote: “Please don’t open up to Charly Boy. He hasn’t even accepted his daughter. Not to talk of a complete stranger. Don’t do it.”

Excel!@ExcelJoab wrote: “Charly boy moved funds that was donated to treat Tyna Onwudiwe. The woman who basically gave him that Alte branding that he has. Moved funds and refused to account for it. Till today. Na that thing make me no rate the baba.”

Extra@richard_leads wrote: “Charly boy: son of late Justice Chukwudifu Oputa SAN…from Oguta in Imo State Education: sent to London to read law but came back with a degree in music Political appointment: area father, king of mad men Known for our mumu don do movement…. I hope I tried.”

Eva@talkk2eva wrote: “I wonder if Charly boy remembers that he has a whole daughter that would be condemned by “Nigerianism” if she’s courageous to face Nigerian standards. The Nigerian value system is so inappropriate that people who deserve recognition have to go through reality shows to be heard.”

Honourable Nengi@KapluShilla wrote: “Dear Charly boy, Nengi is not the reason why nobody knows your songs, instead of dragging her you should ask her where she gets her grace from #SSANengi.”

Extra@richard_leads wrote: “You’re no longer Charly Boy but Charly Man-rochas okorocha2017……where was the energy when his niece Uriel Oputa was appointed IMO state entertainment ambassador post bbn..anyway no publicity is bad, Nengi is on her way up and nothing can stop her.”