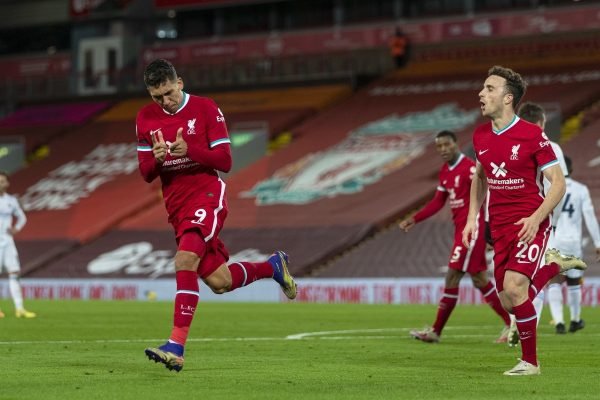 An injury impaired Liverpool registered an emphatic 3-0 victory over Leicester City at Anfield on Sunday. Liverpool are now level on points with Tottenham Hotspur at the top of the table.

Fabinho who just returned from injury was, however, a boost for them in defense.

Right from the start, Liverpool took the game to Leicester who were hoping to go toe to toe against the defending champions. Free flowing football was the case for Liverpool as they got the opener through an own goal by Johnny Evans.

The unfortunate incidence for Evans ensued in the 21st minute when he nodded into the back of his net from a Liverpool corner. In response, Harvey Barnes tried to pull one back. But, his end product was not good enough to trouble Alisson in goal for Liverpool.

Forty-one minutes on the clock, Diogo Jota scored a goal which came with a slice of history as well. He became the first Liverpool player to score in his first four league games at Anfield.

Andy Robertson’s accurate cross met the head of the Portuguese who nodded it home from close range.

At the break, Liverpool were ahead by two goals to nil.

Second half action began with Liverpool on the front foot just like the first half. Sadio Mane’s sensational run saw him fire a shot at Peter Schmeichel who parried it out. Naby Keita had to be replaced as he picked up an injury.