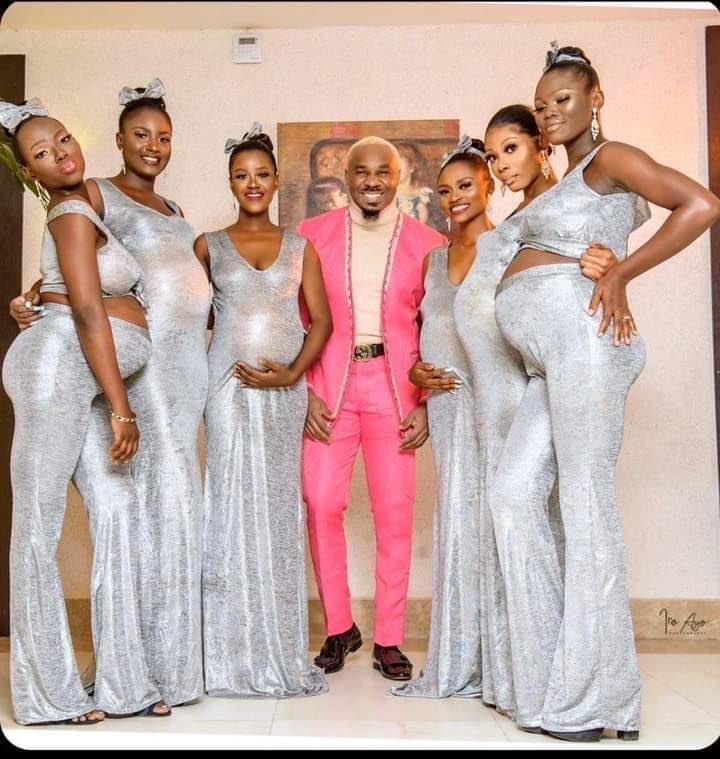 Controversial Lagos big boy, Mike Nwogu , Popularly known as pretty Mike who recently  become a  subject of  another controversy  after he attended the wedding of Nollywood actor, Williams Uchemba, with six pregnant ladies has revealed his plan to start a foundation for pregnant women.

GWG had earlier reported that Pretty Mike who is  known for eccentric acts having in the past attended a public function where he used dog chains on the necks of two women was seen with six pregnant woman at the wedding of actor Uchamba.

In an interview with Saturday Beats, the socialite and nightclub owner,  said he came up with the concept because he want to do away the stereotypes women face in Nigeria,saying that  his motive was  to bring attention to the plight of pregnant women.

“I came up with the concept because I am surrounded by ladies. Because of the publicity this incident has garnered, I am about to start a foundation for pregnant women. We are in a country that stereotypes women.

“No woman can get a job when she is pregnant. So, the question is, how would they survive, especially in this period when COVID-19 has sacked some husbands or partners from their jobs? Even if a woman is qualified, once the employer finds out she is pregnant, she would not be considered for the job.

“Who speaks up for them or the single ladies that are pregnant? Society, government, parents and even the church have pushed them out. To some people, this is all a joke but there are many pregnant women that do not have people to speak out for them.

“They have been stigmatised and many of them are depressed. Now that I have brought them out, some people are celebrating me while some are castigating me, saying it’s an abomination.

” Since that incident, many pregnant women have reached out to me, asking for financial assistance or jobs. I was inspired to do that when a friend got pregnant and her boyfriend and family members abandoned her. When she came to see me, she disclosed how much she had struggled and I felt pained.

“As a matter of fact, one of the ladies is happily married. Her spouse has not been working since the pandemic started and she is also not working. So when I called her to follow me to the event, even her husband was happy. This act has given other pregnant ladies the confidence to reach out to me. The pregnant ladies are all my friends. They all gave their consent.  However, some of them have faced backlashes.

“People make a mistake when they say I took the shine off the couple. My friends that invite me to their weddings do not see it that way. They see it like I added flair to their events. For example, when you invite big artistes to perform at a wedding, it does not mean they have stolen the spotlight.

“I just came to give a different vibe to the event and it is not something I do for everybody. I have friends that get upset that I didn’t attend or make a statement at their events. It is not easy to be creative. It takes a lot of time to get ready. Even Uchemba was not aware of the stunt I was about to pull,” he said.

What Separates Me From Other MCs – Gbenga Adeyinka