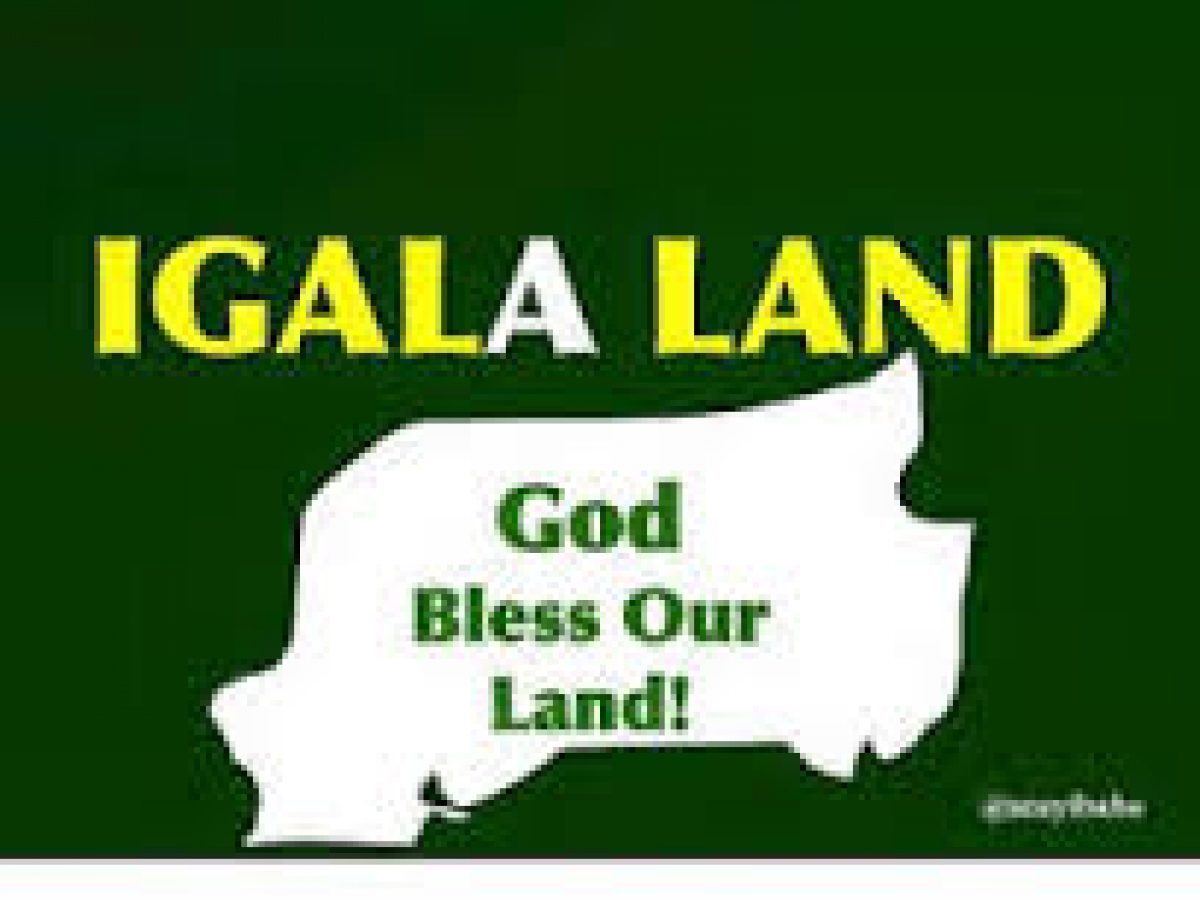 The tradition and process of succession to the throne of Attah Igala, the paramount ruler of the Igala people found majorly in Kogi State and at least seven other states in Nigeria considered one of the most harmonious in the country has once again been activated.

Prince Samuel Opaluwa Oguche, a retired civil servant has been nominated as the new designate to the throne.

Opaluwa of the Aju’ Ameachor Ruling House emerged at a conclave held by elders and stakeholders of the royal house which considered his candidature and that of two of his brothers, Prince Matthew Alhaji Oguche and Prince Ocholi Opaluwa.

In over 700 years of the history of the throne there’s never been any major discord in the process of selection. That is except for a conflict which erupted in 1958 when the administration in the Northern Nigeria Province supplanted Prince Opaluwa Oguche, the father of the three contestants who had had completed the rites and rituals of ascension to the throne and was awaiting formal coronation.

The colonial government instead turbaned another Prince from a different ruling house with no claim whatsoever to the stool at the time and imposed him on the throne. Even that conflict, it is generally conceded was extraneous, rather than from any failure or dysfunction in the Igala traditional succession process .

Compared to even their immediate neighbours in Kogi State the Igala succession tradition remains a model for consensus and harmony. The paramount ruler of the second largest ethnicity In Kogi State, the Ohinoyi of Ebiraland for instance fought a protracted legal battle of 18 years from 1997 to 2015 to retain his throne and was twice deposed- first by the State High Court and later the Court of Appeal before he was finally saved by the Supreme Court on the technicality that his challengers were out of time.

Also, the Obaro of Kabba the third highest stool in the Kogi State Council of Chiefs has been mired in litigation since the new occupant was crowned in 2018.

In contrast, however, when the last Attah of Igala who joined his ancestors recently, His Majesty Idakwo Ameh Oboni II was coronated in 2013 despite fundamental issues of injustice raised by two ruling houses affected by the colonial government interference in 1958 the matter was amicably resolved without litigation.

A remedy that will permanently redress the injustice complained of was part of the resolution that appeased the two ruling houses. The then Governor of Kogi State Capt Idris Wada assured the two aggrieved ruling houses namely Aju’Ameachor and Aju’ Akogu that a legislation will be enacted to secure their rights to the throne.

Prince Opaluwa Oguche the father of today’s candidates to the throne who was denied his crown was of the Aju’Ameachor stock. After his reign, the Aju’ Akogu would have been next in line to the throne and then Aju’Aku before returning to Aju’ Ocholi the ruling house that produced Attah USMAN Ameh Oboni 1, the King whose transition necessitated Oguche being coronated to ascend the throne.

But instead the British procured the then Prince Aliyu Obaje, ignoring all traditions and customs particularly as it relates to rotation and coronation rites and forcefully installed him as Attah Igala.

Before Ameh Oboni passed away there was a frosty relationship between the monarch and the constituted authority in Kaduna. He stood up to the indirect rule system which subordinated his stool to other rulers in Kaduna and Sokoto. The Igala deify the Attah their Priest-King who is considered infallible. The Attah does not bow to or before anyone. He is the ultimate King.

Oboni a young man who ascended the throne in his mid thirties and an illiterate revelling in the reverence he enjoys from his subjects could just not come to terms with becoming an inferior chief to be ordered around by any one.

And he was believed to have wilfully disregarded directives and orders handed over to him in the period of the Indirect Rule in northern Nigeria, to the extent that a decision was taken to depose him. But the Late Oboni, perhaps the most popular Attah in contemporary history would not grant them the pleasure of subjecting himself to the disgrace of deposition, he took the option of harakiri instead.

Thus he died as an Attah forever securing the right of his lineage to royalty and preserving the dignity of the throne.

Analysts believe that the colonial administration was out to avoid having another Attah with the combative disposition of the Late Attah Oboni hence they cast their net far and wide to recruit an Attah with formal western education who would at least know that the era of sovereignty of tribal kingdoms had ceased. They believed that late Oboni didn’t recognize any authority on earth as superior to his throne.

This expedient decision of the Colonial Government made it impossible for the two affected ruling houses to vie successfully for the throne even when the imposed Attah Aliyu Obaje passed away after ruling for 54 years. This was because of the requirements of tradition that made it imperative that only the direct son of a previous occupant of the throne could be enthroned as Attah. Opaluwa who was denied the throne and all his brothers who were children of Attah Oguche Akpa who reigned between 1911 to 1919 had passed away leaving only his own children and other grandsons of Oguche Akpa. Similarly all direct sons of Atabo Ijomi of the Aju’Akogu who ruled from 1919 to 1926 are no longer alive.

By that tradition grandsons could not aspire to the throne.

Thus the Government of Capt Idris Wada enacted legislation which amended earlier statutes that had codified the traditional qualifications for eligibility for the throne. The major amendment is that in the absence of a direct son of a previous Attah when it’s the turn of a particular ruling house grandsons of that house could be crowned.

And where there are no more grandsons alive great-grandsons could equally ascend the throne. Besides, it restored the traditional rotational hierarchy to start from the Aju’Ameachor which is the first and also next in line after the youngest ruling house, the Aju’Ocholi.

The law titled the “Igala Area Traditional Council (Modification of Native Law and Customs) Order 2015… Procedure and Regulation for Selection and Ascension to The Stool of Attah Igala”reinforced the tradition of the process of selection which starts from the conclave of elders and stakeholders of the ruling house whose turn it is to produce a new Attah.

A candidate nominated from the meeting of the ruling house going by the provision of that law will be presented to the three other ruling houses who shall jointly present him to the Head of the Kingmakers another first class traditional, called the Etemahi. The Etemahi and his body of Kingmakers shall meet and appoint the person so nominated from the family as the Attah Igala.

The Etemahi shall then inform the Achadu who is the traditional prime minister of the Igala Kingdom of the appointment and he shall in turn forward the name to the Igala Area Traditional Council for onward transmission to the State Council of Chiefs and to the Governor for his approval.

The law provides that preference shall be given to the eldest son among the contestants.

The leveraging on the new law which awards them the first right in the rotation order, Aju’ Ameachor announced that after its meeting at the Ruling House Headquarters No 51 Inikpi Street Idah which is the home of the late Opaluwa Oguche, the choice of Samuel Opaluwa who is the eldest among the grandsons interested in the throne was made.

The convener of the conclave Prince Yahaya Etu, a former Police Commissioner and eldest member of the clan who announced the choice commended Prince Matthew Alhaji Oguche, a director in the Independent National Electoral Commission (INEC) for his loyalty to the course of the royal house. Prince Oguche had announced his support for the nomination and urged his brother Prince Ocholi Opaluwa a Senior Customs Officer who was absent due to official engagements to equally support the family’s choice.

But the exultation that attended to the exercise is now rapidly giving way to apprehension and anxiety on the part of the Aju’Ameachors who last tasted the throne 101 years ago.

For a start, when they sought to present their nominee to the other ruling houses, two of the three according to President of The Aju’Ameachor Descendants Association, Prince Agono Atodo became evasive.

Addressing the Achadu, Atodo said the family later heard that some members of the Aju’Akogu and Aju’ Aku were individually making bids for the throne hence the reluctance of their ruling houses to perform their traditional and legal obligation of receiving the choice of the Aju’Ameachor.

Curiously, even the two younger Opaluwa Princess, Prince Ocholi amd Prince Matthew were reported to have submitted applications. And also a great grandson named as Gideon Okoliko Opaluwa who is a Special Assistant to the Kogi State Governor, Yahaya Bello is said to have also submitted application to Etemahi .

This turn of event is already endangering the harmony and concord that has been the hallmark of succession in the Kingdom since the first Attah, a Wukari Princess by the name of Ebule Jonu established the dynasty over 700 years ago.

There have been 27 Attahs produced already without record of any major dispute. There has been only one litigation over the Stool when Prince Oguche Opaluwa challenged the 1958 imposition of Aliyu Obaje.

Even then he was prevailed upon to withdraw the case from Court by stakeholders of the Kingdom interested in protecting and preserving the sanctity of the institution.

The Aju’Ameachor are aggravated by this development and have reportedly commenced efforts to ensure that the throne is restored to the house.

The Etemahi asked by our reporter to comment on the legitimacy of his collecting applications from candidates contrary to the traditional practice and the provision of succession law declined comments.

However, the handling of this seemly discordant tussle alien to the experience and  record of smooth succession by the Kingmakers in the days to come will determine to what extent the sanctity and reverence of the Attah Igala Stool will endure.