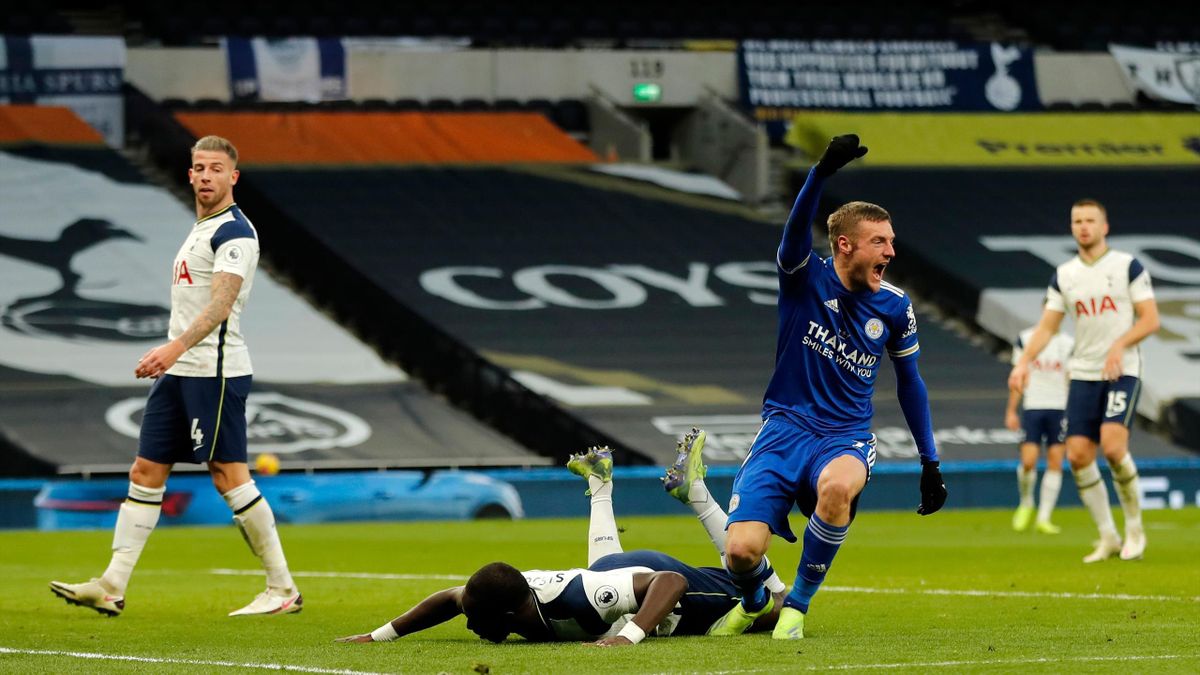 Tottenham Hotspur’s title challenge was struck with a major blow after a 2-0 loss against a Jamie Vardy led Leicester City at home.

Jose Mourinho’s outfit hoped to put last week’s 2-1 loss to Liverpool at Anfield behind them, but, they were undone by a brilliant Foxes’ side.

The development leaves Tottenham six points behind Liverpool and drops them to fourth on the log, while Leicester climb to second position behind Jurgen Klopp’s dominant Reds.

Leicester City were in the front foot for the opening 20 minutes of the game, however, it was Harry Kane’s deflected shot from a free kick which Peter Schmeichel kept out in the 34th minute that sparked the game into life.

Jamie Vardy fired the Foxes into the lead from the penalty spot in the fourth minute of added time in the first half after Wesley Fofana was brought down in the area by Serge Aurier.

Vardy has now been directly involved in seven goals (five goals, two assists) in as many Premier League away games against Spurs, more than the statistics from any other opponent on the road in the competition.

At halftime, Leicester had a slender 1-0 lead.

A significant change had to be made for Tottenham to get back into the game. This prompted Gareth Bale to be introduced in the second half. Leicester showed they were not flustered by the alterations from their Spurs adversaries when James Maddison thought he got the second of the game, only for his goal to be chalked off by VAR.

Tottenham’s day went from bad to worse as Toby Alderweireld scored an own goal in the 59th minute. Jamie Vardy’s desire to attack the ball from the corner kick pressured Alderweireld to head into his own net.

The latest recipient of the FIFA Puskas award, Son Heung Min tried to pull one back for his side. That was not going to happen as Schmeichel denied him a moment of glory.

Game, set and march, Leicester City were tight at the back to secure Brendan Rodgers’ first win over a stunned Jose Mourinho.

Nonetheless, Tottenham have both conceded a penalty goal and an own goal in the same Premier League game for only the second time, and the first since March 2000 in a 2-1 defeat to Arsenal.

Christmas begins for Leicester City as they will be in the first two places of the top-flight table at Christmas in consecutive seasons for the first time in their history.