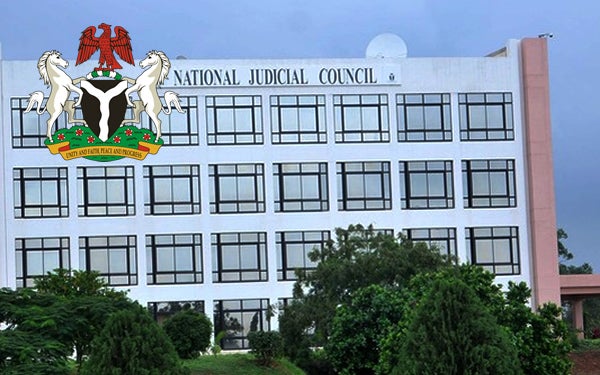 The National Judicial Council (NJC) has recommended the compulsory retirement of the Grand Kadi of Yobe, Shu’aibu Talba andJustice Abdulkareem Abdulrasaq, a judge of the Osun High Court for alleged age falsification.

This is contained in a statement by Mr Soji Oye, the NJC Director of Information on Sunday in Abuja.

The decision for the immediate retirement of the judicial officers was taken at the 93rd meeting of the NJC which held virtually on Dec. 16.

The council also recommended the appointment of 69 other judicial officers to enhance justice delivery in the country.

The council noted that Talba was recommended for compulsory retirement following an investigation into a petition against him by one Malam Zakar Adamu, Chairman, Movement for Justice in Nigeria.

The NJC also requested the Government of Yobe State to deduct all salaries received by His Lordship from Feb. 1, 2020 till date, from his gratuity, and remit same to the NJC that pays salaries of all judicial officers in the federation.

Regarding Abdulrasaq, council  said following investigations into a petition against him by a Senior Advocate of Nigeria, Chief Yomi Alliyu, it was discovered that he falsified his date of birth from Sept. 3, 1955 to Sept. 3, 1957.

“The Council, therefore, recommended His Lordship’s compulsory retirement to Governor Gboyega Oyetola of Osun with effect from Sept. 3, 2020.

“It also requested the Osun Government to deduct from His Lordship’s gratuity; salaries received by him from Sept. 3, 2020 and remit same to the NJC”.

Meanwhile, the body, in exercising its disciplinary powers under the 1999 Constitution has suspended both Talba and Justice Abdulrasaq from office pending the approval of the recommendation for their compulsory retirements by their respective Governors.

The NJC also dismissed 18 petitions against 14 judicial officers for lacking in merit.

Also dismissed were petitions against Justices T. O. Uloho and Michael N. Obi of the Delta State High Court, while that of the Lagos State High Court was Justice G. M. Onyeabo.

Others are Justice A. I. Iyayi-Lamikanra, the Chief Judge, Justice A. U. Kingsley-Chuku and Justice J. N. Ukpugwnum of Rivers.

“Similarly, Council considered the report of the Interview Committee and recommended the appointment of 69 judicial officers as Heads of Court, Judges of High Court of States, Kadis of States/FCT Sharia Courts of Appeal and Judges of the Customary Courts of Appeal.

“It also received and approved the report of its Committee on Appointments, Promotion and Discipline which recommended the promotion of 70 staff of the NJC.

Pictures: How Kankara Boys Were Received