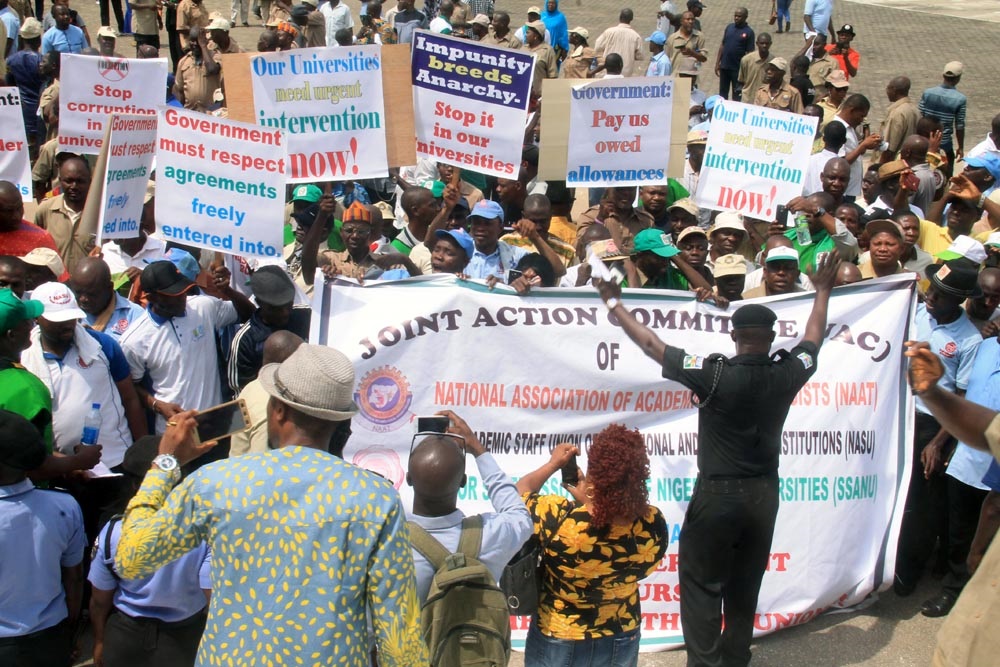 Suggestions of peace in the universities with the decision of the Academic Staff Union of Universities, ASUU to call off its nine month strike have been thrown overboard with the apparent decision of the non-teaching staff to proceed on strike.

The grouse is the alleged imbalance in the sharing formula of the about N40 billion Earned Allowances.

It is alleged that ASUU would get 75% of the allowances leaving three non academic unions, Senior Staff Association of Nigeria Universities, SSANU, Non-Academic Staff Union of Educational and Associated Institutions, NASU and the National Association of Academic Technologists, NAAT to share the balance of 25%.

National President of NAAT, Comrade Ibeji Nwokomma swearing that his members would immediately go on strike over the development said on Wednesday:

“My union is rejecting the sharing formula of the Earned Allowances as it is being done presently by the government. Government has allocated 75 percent of the money to ASUU and 25 percent to all other non teaching unions in the universities, that is grossly inadequate.

“That is robbing Peter to pay Paul and using divide and rule in the University system. No union not even ASUU has the monopoly of opening or closing of schools through strike, other unions also have that capacity to ensure that the system does not work.

“Secondly, my union, ASUU and other unions negotiated with government , so payment of Earned Allowances will be based on unions, it should be on the basis of the 2009 Agreement, that is where the Earned Allowances is derived from.

“So lumping my union with other non-teaching staff is neither here nor there and totally unacceptable to us.” “We had an MoU with government just signed on 15th of November which says that government should clearly define what supposed to go to each union and government agreed that it was going to do that and today they just shared the money anyhow they want it without adhering to the MoU we had with government. “My union is asking that our own Earned Allowances should be specified, whatever it is should be specified just like they did to ASUU.

“If nothing is done we will close down the system until we are fairly treated.

“Government should convene a meeting immediately to settle this issue otherwise any thinking that school will reopen, they are just wasting their time, school will not reopen until these issues are adequately taken care of.”

He said, “Honestly I believe that this remains a rumour even though I know it could be true, I have seen 75 percent and 25 percent.

“But truly if it is that, we have stated in no uncertain terms that we will not take this kind of lopsided allocations again because what is the scientific measurement used to give this money. We have stated before now that the least we can take is 50-50, they are not more in numbers.

“And even if they want to do something like that maybe this is my own personal opinion, I may not insist on 50-50 but at least something reasonable. We have so much numbers. “If they give for example 60-40, do you think the noise will be there? Government does not want peace if it is giving 75 percent to only one union and giving 25 percent to three unions, does it make sense? “Certainly, my members are more than willing to down tools if this becomes a reality.”