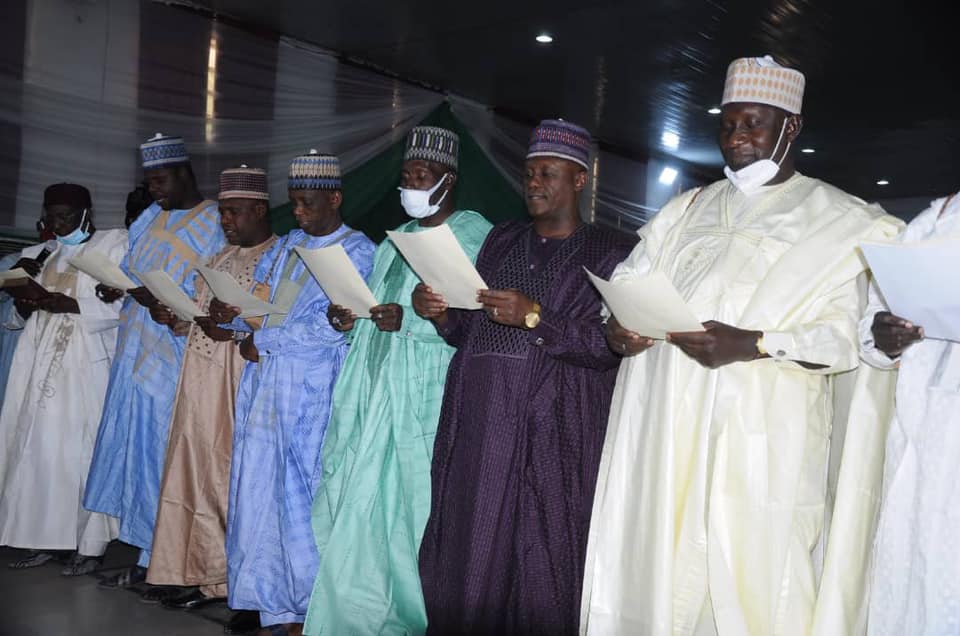 Borno Governor, Professor Babagana Umara Zulum on Wednesday presided over the swearing-in of 27 elected chairmen of local government areas, among them, two University professors and PhD holders, raising the standard of leadership at LG levels.

The two professors include Adamu Alooma, a Professor of banking and finance, also former Dean, at the faculty of management sciences in University of Maiduguri, who took oath to become chairman of Damboa local government area, and Ibrahim Bukar a Professor of education, also from UNIMAID, sworn-in as chairman of Gwoza LGA. Both Professors took part in the statewide LG chairmanship and councilorship elections held on November 28, which the APC won with landslides.

Also sworn in was a PhD holder, Dr Ali Lawan Yaumi, for Magumeri alongside other holders of post graduate and first degrees, as well as experienced grassroots politicians with capacity for public service delivery.

During the swearing in ceremony, which took place at the multipurpose hall of the Government House in Maiduguri, Governor Zulum recalled that election was not conducted in the state for over 10 years, due to lingering security situation in Borno.

The Governor congratulated all the elected chairmen with a reminder of the major task ahead of them which they could only do with resources at their disposal.

Governor Zulum in his remark, directed the ministry for local government and emirate affairs to immediately release to elected chairmen, all funds allocated to the 27 local government councils from the federation account so they could begin to impact lives at the grassroots.

He however called on the elected officials to discharge their duties with the fear of God, but without fear or favour.

… Says ‘You must operate from safe LGAs’

Governor Zulum, in his constitutional supervisory role, charged all with a condition to operate in their respective local government headquarters that are safe and with citizens living there.

He said, governance will not make sense if chairmen choose to operate from Maiduguri whereas those who cast votes from them live in local government areas outside Maiduguri.

Zulum noted that the chairmen need to live and operate from the midst of their people in order to know problems of the moments and address them.