Rivers: Few Options For Abe In Battle With Amaechi 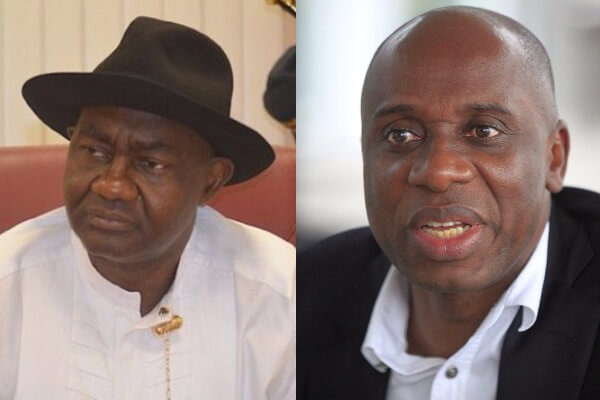 Hon. Ogbobula was elected by the faction loyal to the Minister of Transportation, Rotimi Amaechi.

The implication of that endorsement by the national leadership of the party is that the former Senator representing Rivers South East Senatorial District in the National Assembly, Senator Magnus Abe, may find himself in political quandary.

Abe has been engaged in a long drawn battle with his former friend, Amaechi, over the control of APC in the state.

Abe’s appointment to the Board of the Nigerian National Petroleum Corporation (NNPC) in May 2020 was seen as plot to empower him over Amaechi.

The appointment was credited to the late Chief of Staff to President Buhari, Abba Kyari who died of Coronavirus complications a month earlier in April.

Kyari never had a good relationship with Amaechi and some of the political leaders who had direct access to Buhari and craved opportunity to undo them before he passed away.

So while the crisis persisted, Igo Aguma emerged as the factional chairman. Though Aguma and Abe claim to be working independently towards the resolution of the crisis in the party, their common opposition to Amaechi has fed insinuations of a covert relationship between both men.

Remarkably within hours of the decision by the Amaechi faction to suspend Abe, the Aguma faction countered with their equal sanction against Amaechi.

However, the APC national leadership through the Head of Legal Services, Dare Oketade, described the suspension of the party’s chieftains as a nullity and of no effect.

The party said “We have checked through our records at the National Secretariat and found out that those persons are not officers of the party in Rivers State.

“I am therefore directed by the National Chairman, His Excellency, Governor Mai Mala Buni, to notify you, for the avoidance of doubt, that the Rivers State chapter of the APC is led by Hon. Isaac Ogbobula, who was duly sworn in at the National Secretariat of the party on December 2020 by virtue of the National Executive Committee meeting held at the Council chamber of Aso Rock Abuja.”

“By the above, I wish to draw you and other APC members in Rivers State attention to the consequences of impersonation both within the constitutions of our party and laws of Nigeria.

“The party will not hesitate to take necessary disciplinary measures should any member of the party in Rivers State continue to take steps in impersonating the recognised state caretaker committee led by Hon. Isaac Abbot Ogbobula or any of his local government ward executives.”

For Abe who has repeatedly said he has no plans to dump the APC, the options before 2023 is dicey.

His followers may also be in the quandary.

Bowing to Amaechi at this time may be very difficult. Will he remain in APC and join those who are against the Caretaker Committee or seek political relevance somewhere else?