Obasanjo: I Have No Igbo Blood, I Am Fully Yoruba 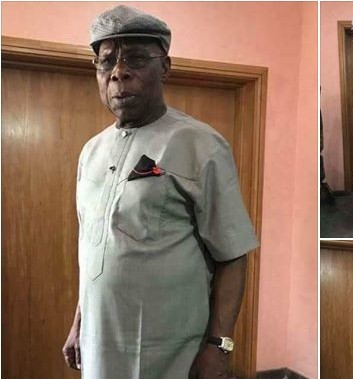 Recent insinuations about Olusegun Obasanjo having Igbo blood may not make any headway given the former president’s assertion that his two parents are of Yourba lineage.

The assertion about Obasanjo being of Igbo ancestry had been fueled in a recent interview by Senator Anthony Adefuye who had claimed that the former three time head of state was of Igbo lineage.

“Some people may argue that what about Obasanjo? Obasanjo is not a Yoruba man. He is an Igbo man from the South-East. His father was from Anambra while his mother was a Yoruba woman. And that was why during his tenure, he completely ignored the South-West. For example, throughout his eight years, he did nothing on the Lagos-Ibadan Expressway.”

The assertion by Adefuye had been the gist of some political gossip over a period of time.

GWG can now confirm that Dr. Obasanjo had addressed the issue in the second volume of his book, My Watch.

Obasanjo in ‘My Watch Volume 2: Political and Public Affairs,’ affirmed that his two parents were from Owu in Abeokuta, Ogun State.

Subtly dismissing the issue, of having Igbo blood, Obasanjo said:

“To be a Nigerian, I have to be born somewhere in Nigeria or be of Nigeria parentage or one must naturalise. If the other can hide their identity, I cannot, because my two parents were from Owu in Abeokuta. And you cannot be more Yoruba than an Owu man as the first child and daughter of Oduduwa, the father of Yorubas was the mother of all Owus. What is more, I bear Owu tribal marks. And better or worse still, I speak English with my Owu dialect.

“I have always maintained and felt proud of my Owuness, Yorubaness and Nigerianess in that order. They are all part of my cherished identity. But I always refused and will always refuse to be constrained, diminished or reduced to the level of Yoruba leadership. Without being immodest, I am a national leader, an African leader and a world leader in my own way.

“There are Yorubas of the mentality that if they cannot permanently rule Nigeria, then Nigeria should be broken up in the euphemism of confederacy. They would rather be rulers in hell, if they cannot be rulers in heaven. They are mainly those who see themselves as heirs apparent to (Chief Obafemi) Awolowo. I neither share their philosophy nor their mindset. Some of them contributed to putting Bola Tinubu in power and in spite of largesse of houses in Victoria Island built for them by Bola; they turned against him when the flow of largesses started to dry up.

“They are the same people who claimed that I denied being a Yoruba man. I am more Yoruba than all of them. The Ijebus among them must be reminded that the Awujale asserted that they are not from Ife, the cradle of Yorubas but from Wadia. Those who are crying more than the bereaved like Olaniwun Ajayi and Femi Okurounmu are self-centered and lack integrity.