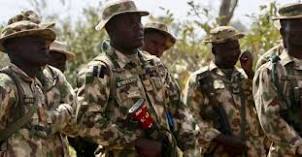 The Coordinator, Defence Media Operations, Maj.-Gen. John Enenche, in a statement on Wednesday, said the rescue operation took place on Tuesday at Wurma Village in Kurfi Local Government Area of the state.

He said troops in conjunction with personnel of the Nigeria Police Force swiftly mobilised to the location following credible information on the bandits activities in the village.

According to him, the troops engaged the bandits who had kidnapped some locals and rustled some livestock from Kwayawa Village in Safana Local Government Area.

“With superior firepower and support by Nigerian Air Force helicopter gunship, the armed bandits were forced to abandon the kidnapped victims.

“During the encounter, troops also arrested one informant of the bandits named, Mohammed Saleh along with some arms and ammunition.

“The rescued kidnapped victims have been successfully reunited with their families and the recovered livestock handed over to the owners.

“The arrested bandits’ informant has been handed over to appropriate prosecuting agency for further action,” he said.