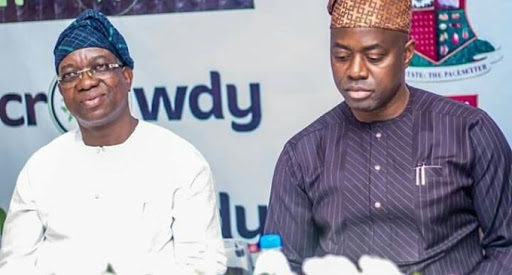 Leaders and stakeholders of the PDP from the Oke-Ogun axis of Oyo State have waived allegations of marginalization of the deputy governor, Engr. Rauf Olaninyan to give strong approval of Governor Seyi Makinde.

The deputy governor who is from the area was absent at the weekend gathering where Oke Ogun leaders strongly endorsed their approval of the governor.

Also absent according to GWG checks was Senator Hosea Agboola, chairman of the Governor’s Advisory Council, who it had been muttered was usurping the deputy governor in the government.

Both men are from Oke Ogun.

Nonetheless, the leaders including stakeholders and elders of the PDP in the zone at the meeting commended the governor for undertaking several development projects and initiatives aimed at opening up Oke Ogun to the rest of the state and the country.

Governor Makinde was equally commended for introducing policies and programmes that have changed the standard of education for good in the state, including the free qualitative education programme and the reduction of out-of-school children, among others.

Speaking to newsmen at Otu,  at the end of a meeting of Oke-Ogun PDP leaders and political appointees the trio of Chief Jacob Adetoro; Oyo North PDP Senatorial Chairman, Alhaji Waheed Oluwakemi and a leader of the party from Kajola Local Government, Alhaji Ajadi Waheed, made the declaration, insisting that Makinde  has written his name in gold within a short time.

According to Adetoro, notable PDP leaders in Oke Ogun, party structures across the 10 local governments, appointees of Governor Makinde and local government caretaker chairmen had converged on Otu to celebrate the New Year with the Permanent Secretary of the Ministry of Lands, Housing and Urban Development, Townplanner Ademola Ajibola.

Similarly, the Oyo North PDP Senatorial chairman, Oluwakemi stated that what Governor Makinde has done in Oke Ogun is remarkable, saying that the meeting centred on how PDP stakeholders in Oke Ogun could support the governor to achieve more successes.

Oluwakemi said: “What the governor has done so far for Oke Ogun zone is remarkable. Since 1999 till date, no governor has ever left Ibadan for up to four days to stay in our zone. After his electoral victory, he sent his team to each local government in the zone to interact with us on what we needed. As I am speaking with you today, out of 10 things that zone requested for, the governor has fulfilled  eight. As a matter of fact, the remaining two are under process.

Appointees of Governor Makinde, who attended the meeting, include the Commissioners for Budget and Planning, Agriculture and Trade and Commerce, Hon. Adeniyi Farinto; Hon. Ojemuyiwa Ojekunle and Hon. Niyi Adebisi; Special Adviser to the governor on Legislative Matters, Hon. Samuel Adejumobi; chairman of the Oyo State Rural Water Supply and Sanitation Agency, Alhaji Najeem Omirinde and the chairman of the Pilgrims Welfare Board (Muslim Wing), Professor Sayed Malik.