How Markets Reacted To CBN's Retention Of Rates 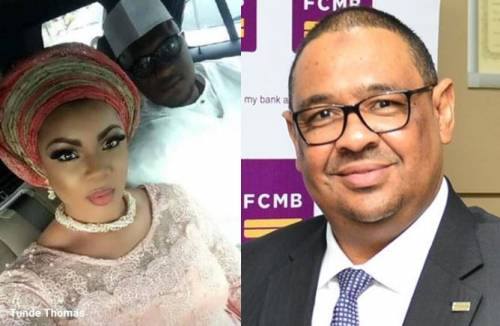 Saharareporters has reported that his wife has now moved out of their home following the allegations that her husband fathered two children by a former staff, Moyo Thomas. The revelation of the alleged paternity fraud was said to have broken the heart of Moyo’s husband, Tunde Thomas who suffered a stroke and ultimately died last December.

The alleged scandal spurred the petition to the Central Bank of Nigeria and an uprising that forced Nuru to at the beginning of the year go on voluntary leave to enable the authorities investigate the allegations against him.

His decision to stay at home it emerged, may have compounded the situation for his family as Saharareporters has alleged that his wife has opted to stay out of the home.

The online newspaper reports that she may be opting for divorce with the husband.

“I know she has moved out. This case is beyond Moyo or the late Tunde. His own marriage is about to crash now. The wife and her family are really giving him problems. They are ready to deal with him. The Moyo stuff is part one, he is currently facing the second part with his wife,” one of the sources told SaharaReporters bringing a new twist to the FCMB sex and paternity scandal.

Friends of Tunde had in a petition called on the CBN to act on the allegations levelled against Nuru observing that his direct actions against the home of his subordinate led to the death of Moyo’s husband.

“This is a case of gross misconduct based on ethical grounds and an unjustifiable economic oppression by the elite (Adam Nuru) against the underprivileged in the society,” the petition read.

“The MD has been doing everything possible to sweep this case under the carpet. We implore the Central Bank of Nigeria, as the apex regulator, and the board of FCMB to investigate this for the integrity of the bank and Nigerian banking industry.

“This is a case too many, while I agree that this is not the full story, the barest minimum will be an investigation of this unethical conduct by the current MD of FCMB Bank, Adam Nuru.”

The bank in its response to the development had said:
“We are aware of several stories circulating across several media platforms about our bank’s Managing Director, Adam Nuru; a former employee, Mrs Moyo Thomas, and her deceased husband, Mr Tunde Thomas,” the statement said.

“While this is a personal matter, the tragedy of the death of Mr Tunde Thomas and the allegations of unethical conduct require the bank’s board to conduct a review of what transpired, any violations of our code of ethics and the adequacy of this code of ethics.

“This is already under way. During the period of the review, the managing director has volunteered to proceed on leave. This will guarantee the sanctity of the review process.”

Moyo, the lady at the centre of the allegations on her part has reportedly claimed that the children were Tunde’s.

How An African Became The World’s Richest Person