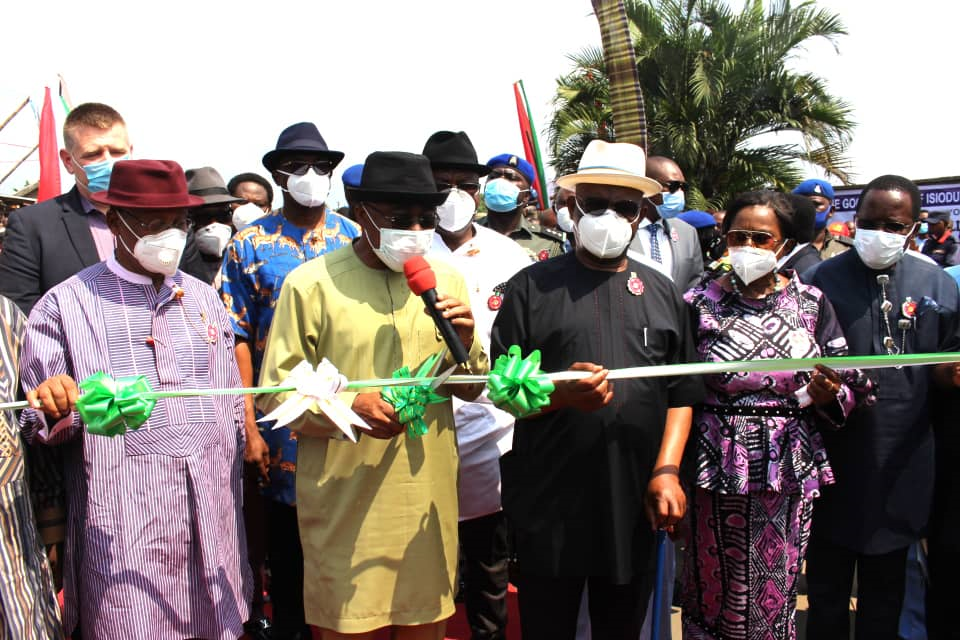 Enyinnaya Abaribe has called on the Federal Government to look towards the Rivers State Government on how to deliver on promises. For Abaribe, the FG can learn from Rivers in not making excuses as a rule in governance.

The Senate Minority Leader spoke at the inauguration of the Isiodu Road in Emohua Local Government Area of Rivers State.

He said while the Federal Government finds excuses for their inability to execute projects that have been appropriated in the National Budget, Governor Wike blazes a shining example of how to solve social,  economic and infrastructural problems as he makes life better for Rivers people.

“Today, I have seen that you’re the real talk and do person. That you have been able to bring eminent Nigerians to come and be commissioning projects that you started and completed, since December 2020, is something that is unprecedented in Nigeria.

“It is the fact that it is not just having the money but it is the will to be able to deploy it for the benefit of the people that you have put in position, to redirect and change their life.

“Let me also say that you are an ambassador, a role model and also a shining light of PDP in Nigeria.

“When they continue to look for excuses in the Federal Government, and we come here and see how you are doing your own thing without looking for excuses, we know that somebody like you cannot be left alone in Nigeria. We must all continue to support you,” he said as he urged charge that the FG can learn from Rivers on project delivery.

Governor Nyesom Wike on his part said politicians can no longer be tolerated if their strength is only to make promises without the capacity and will to fulfil them.

The governor said there must be accountability among politicians and anybody who seeks elective public office should not only nurse such ambition without having requisite competence to deliver on projects and services that solve problems of the people.

“If you want to be a Councillor, Council Chairman, a Senator, a Governor or Mr.  President, you know there are problems in Nigeria that you want to solve. You shouldn’t come after securing the position to say, I’m sorry I couldn’t do that thing I promised because of the problems we are having.

“Your business is to solve problems. It is not to give excuses why that problem cannot be solved. Politics is no longer rhetoric’s. It is no longer making promises, and after voting, you abandon the people.

“Now, politicians should be held accountable for every promise they make. In that way,  everybody will know that when your are bringing people for elective position, they must be people who will say something and fulfil it. This is not the period of excuses,” he said.

Senator Abaribe’s charge that the FG can learn from Rivers follows the daily round of commissioning of projects in Rivers State in the last few days.