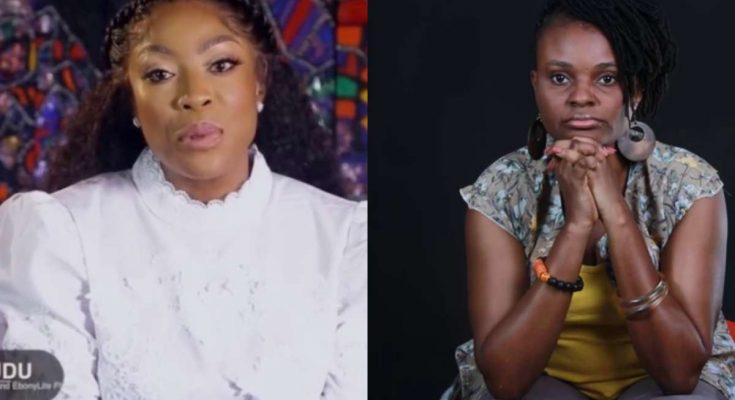 The former Premium Times journalist, Tobore Ovuorie who accused Mo Abudu and her company, Ebony Life of exploiting her life story in the human trafficking movie, Òlòturé has finally responded to the allegations of blackmail and intimidation raised against her by Ms. Abudu.

Ovuorie had alleged in a social media recording that the movie, Òlòturé was her life story and that her demand for recognition and compensation had been damned by Ms. Abudu.

She further accused Abudu and Ebony Life of copyright violation.

Mo Abudu in her response gave her perspective wherein she said she obtained permission from Premium Times for her adaptation of Ms. Ovuorie’s work. Her perspective also included the fact that Ovuorie was carried along.

Following the favourable reception to Ms. Abudu’s reaction, Ovuorie has now responded in a facebook post where she further disclosed that Mo Abudu blocked her on Instagram.

• The immediate inclusion of a proper open credit and end credit in the Movie, acknowledging the adaptation of her work in line with industry standard and practice; and

• Restriction on any further exploitation of our Client’s published life story by your good self, your company and its related companies or affiliates, in any form, including our Client’s post -investigation struggles and experiences, such as her nervous breakdown episodes, which she personally shared with you on set, on or about 6 June 2019 during the recording of the special edition of your program titled: ‘Moments With Mo’ at the Ilupeju recording studio of your company.

The open and end credits of the Movie should be re-edited to read as follows:

Open Credit:
“THIS FILM IS LARGELY BASED ON EVENTS WHICH HAPPENED TO A NIGERIAN INVESTIGATIVE JOURNALIST IN A 2014 PUBLISHED INVESTIGATIVE STORY”.

“THIS FILM IS AN ADAPTATION OF:
WEST AFRICA| UNDERCOVER INSIDE THE HUMAN TRAFFICKING MAFIA, AN INVESTIGATIVE STORY BY TOBORE OVUORIE PUBLISHED BY ZAM MAGAZINE, NETHERLANDS, ON 22 JANUARY 2014 AND SUBSEQUENTLY BY PREMIUM TIMES, NIGERIA”.