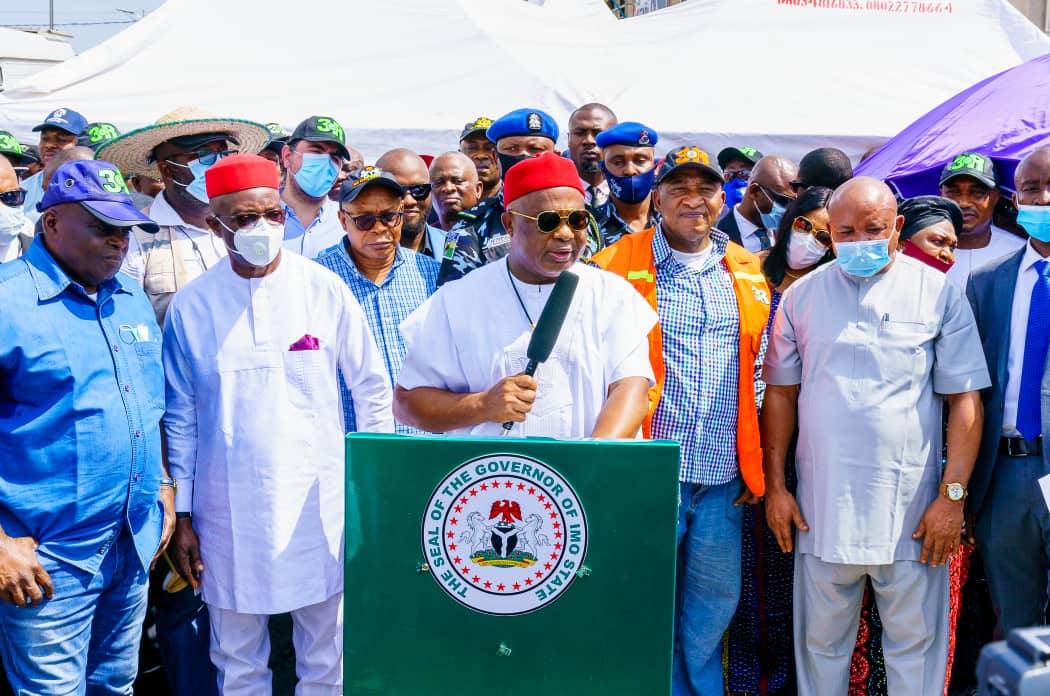 For some time now, I took a break from commenting on; what I will refer here, ‘the political wars’ in Imo – for we have engaged for so long in a war for political supremacy of which, I have been at the forefront of this wars and I think it is time to detoxify the highly charged political environment in our state and, by popular demand, give an unbiased assessment of the current government in Imo as they clock one year in the reigns of governance for the benefit of Imolites far and near who depend on me for critical and unbiased assessment of things in Imo polity.

This is going to take a drastic shift from the oppositional figure that Nwaogwugwu has been a figure head of since the inception of this government.

Critically assessing the period in view – January 14, 2020 to January 14, 2021; I shall be writing as not a member of the opposition but an ordinary Imolite whom many rely upon for factual, critical and unbiased assessment of the Imo socio-political issues.

I shall be taking it on a sector by sector analysis:

The Civil service of any state or government is the engine room of that government that failure or success of the administration will be heavily dependent on her workforce.

Civil service in this regard for the sole purpose of this expository essay will comprise of the entire Imo workforce.

Upon the assumption of this government on January the 14/15th, 2020; one of the first things His Excellency, Gov. Hope Uzodimma said was that as a man who has spent more time in the private sector – he would bring the years of knowledge and experiences to instill a working Imo public service system.

One year down the line, has he been able to keep to that promise?

We shall explore it together – let’s ride on.

In assessing a group of people whether they have faired well or badly – you will most certainly start from the prism of the welfare of such a people or organization in question.

From the welfare point of view – from my critical and unbiased standpoint; the governor started with implementing a welfare package of transport system to ensure workers’ comfortablity when the administration introduced a subsidized transport scheme where the workers of the state government would part with a little token from their salary in every month thereby saving more on what they would have ordinarily made away with if left in a normal transport arrangement.

This is a score for the state government on welfare of the state workers.

Bringing sanity to the system; the 3R APC government of Gov. Hope Uzodimma implemented the sanitization efforts that was started by our short-lived PDP government of His Excellency Rt. Hon. Emeka Ihedioha. By this applaudable singular gesture of continuity in government as examplified by His Excellency Senator Hope Uzodimma’s administration, the government saved hundreds of millions of Naira that could have been wasted and pilfered away by payroll fraudsters thereby rejiging the system to healthy productivity.

Payment of salaries: I took out time during my long break in public commentaries of inquiring the true status of worker’s salaries in the state and what I found out is that there has been a regular payments of workers’ Salaries in the state except for some of the workers who are either having issues in migrating to the new micro finance banking system or having issues to sort out with their BVN.

For me, welfare of the workers and high productivity of the workforce is a noble thing that must be fine tuned and sustained with the view of bettering the State’s economy because a well treated workforce will certainly translate into a productive workforce.

On road construction and the overall public infrastructure of the state under the period in review; from my honest assessment, it is my considered opinion to say the government is doing something but has not done enough, and more should be done.

It is understandable, for a government that took on to the reigns of the state during a time the entire world bled courtesy of the global Covid-19 pandemic, it could be excused. As if that was not enough, immediately after it seems that the country was going to recover from the Covid-19 pandemic induced lock down, end SARS lock down happened and the attendant disruption to social and economic order.

However, the government was still able to put in some structures in place in terms of road construction and other infrastructural development.

I took a walk around the state recently and found a litany of ongoing road construction in many parts of the state abound.

Public infrastructure like the the erection of traffic lights at major parts of the state capital which has eased off the usual draconian traffics that have become the undeniable trademark of Owerri is becoming a thing of the past and this is very commendable as it must be improved upon.

The construction of an ambitious underground drainage system in Owerri must be commended as this will aid in no small ways in solving the rampant flooding menace in Owerri when completed and put to use.

In one year, with the highlighted constraints with which the government has battled up with, I think, in fairness and honesty, the government hasn’t done badly in areas of Road construction and public infrastructure while more are needed to be done. There should be a room for improvement.

Stability In The Polity And The Harmonious Working Relationship With IMHA

For the state to move forward in all round development, the stability and harmonious working relationship between the Legislature and the executive arm of the government is key.

And I must digress a little bit, although, I don’t know if this should be recorded as an achievement but it should however be noted that a state in which her legislative arm and executive arm of the government are in loggerheads, then the entire and the rest of the state shall be consumed in it at the expense of their development as they say: when two elephants fight, the grass suffers and yes, I think it is worth a mention.

It is obvious that the Governor has a good working relationship with the state house of Assembly and this feat should continue for the stability of the state polity and overall development of the state.

The Intangibles Of Governance

Often times than not, at most occasions, our people, due to their level of understanding of governance or what good governance indexes really entails, they often mistake good governance as a brick and mortar approach; of only excavation of roads and all the other outlandish stuff but that is not all about governance. Governance involves also, what I will refer here as ‘the intangibles of governance’.

Talking about the intangibles of governance — from my research, the governor has set up what is called an IMO STATE DATA MANAGEMENT CENTER. This is ambitious.

The roles of data management or data center cannot be over emphasized most especially at this so called jet age of Facebook and Twitter era.

Data Centre is very crucial in all round development in the 21st century policy formation and service delivery. With accurate data management system in the state, deliverables could be done with certainty and a level of accuracy.

It is a laudable initiative for the 3R government of Governor Hope Uzodimma to have tinkered out this noble idea and putting it into reality.

Government’s initiatives in this part of the world are always taken with a pinch of salt by the citizenry and by the creation of this data center, I discovered that the citizens of our dear state will now have the opportunity to get involved into how they are governed as it has the multiplicity purposes of citizens’ call Centre where complaints and inquiries about the activities of the state government like payment of salaries, payment of pensions, issues of none captured of BVN, etc. are attended to.

One thing is tinkering out a laudable initiative and translating same into a reality and another thing is making such initiatives work for the greater good of the state.

How do the government ensure the workability?

The workability and sustainability of the noble idea can be achieved when thorough-put professionals are hired to man the positions and offices in the system.

The Governor must go for the best where ever he sees one irrespective of wherever such a professional might have come from, even if he or she comes from the opposition.

Health care delivery aspects of the government is very important to the members of the public because this area could be where majority of the citizens could directly benefit from their government.

One year down the line of this government, one could honestly say that not so much has been heard of about health care delivery as there has been some lingering issues with medical and health practitioners in the state.

Then the way and manner the Covid-19 scourge was handled is also not too encouraging as more is needed to be done to save lives.

However, there has been some good take aways in the one year life of this administration of His Excellency Gov. Hope Uzodimma.

The recent launching of mobile clinics where one mobile clinic vehicle was donated to each local government of the state is very audacious and laudable most especially at this time of the rampaging Covid-19 scourge.

Something has also happened to the one and only teaching hospital in the state as students and staff of IMSUTH orlu could enjoy a motorable and accessible roads to their school and hospital. This in my humble and honest opinion is commendable having seen how torturous using the roads were in the years past.

From Supreme Court Governor to the People’s governor?

The mature disposition of His Excellency in handling the affairs of the state is also a high pointer to the relative and calm peace the state has enjoyed. His psychological preparedness that is exhibited in his talking less and doing more approach to issues is another huge plus that has contributed in the pursuit of the overall advancement of good governance in the state.

Without mincing words and being true to good conscience and judging from my dispassionate representation of facts itemized on this courageous epistle, I think it is very worthy of mentioning of the very transformative power his achievements in the last one year which the administration portend and very indicative.

Having sincerely and diligently carried the scopes of development of our dear state in a manner that elicits commendations, the Supreme Court Governor toga should be stripped off as it does not truly represent the person of the governor as we have assumed him to be in favor of that of a governor who is diligently carrying out the work as a man who has shown true character of strength in the overall development of the state should be the governor of the people or People’s Governor if you choose to call him.

Devoid of politics of acrimony and bitterness, in the course of my public communications, I shall henceforth address him in the light of what his achievements represent – the Governor of the People.

For want of space, I shall continue the expository x-ray in a subsequent edition in furtherance of my intervention in the area of critical assessment of this government.

Ambrose Nwaogwugwu was until recently, the Director-General of Imo PDP NEW MEDIA, he writes from Owerri.