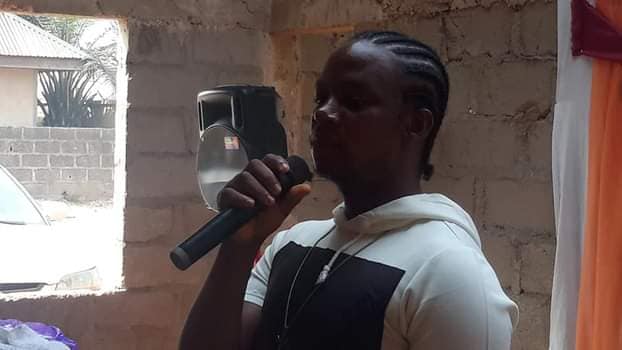 Mr. Terfa Mgbateman, a secular musician, aka Osaze, a profane Benue musician as adjudged by a cleric, received the sacrament of baptism on Sunday in Makurdi.

Apostle Matthew Hwande of The Salvation of Christ Family Ministry baptised the musician popularly known as Osaze in the entertainment world in River Benue and gave him the name Thaddeus.

Before performing the baptism, Apostle Hwande emphasised that Christ came to call sinners to repentance.

He quoted several scriptures including Luke 5: 27-32 part of which states that “I have not come to call the righteous, but sinners to repentance.’’

“God has performed this miracle as a demonstration of His power to deliver and as a witness against those who do not accept His call,’’ he said.

He said that of all Tiv, Benue secular musicians, Osaze, a profane Benue musician could not be compared to any other, but that God called him to leave secular music and celebrate the Lordship of Jesus Christ.

Responding, Mgbateman said that he surrendered his life during the New Year church service through the influence of one of his relatives who invited him to the church where he met Apostle Hwande who prayed for him.

“Following my repentance I took a decision to become a disciple of Jesus Christ hence the need to receive baptism as my first sign of repentance,’’ he said.

Mgbateman pledged that henceforth he would use his talents to worship God and called on everyone to surrender to God’s sovereignty. (NAN)