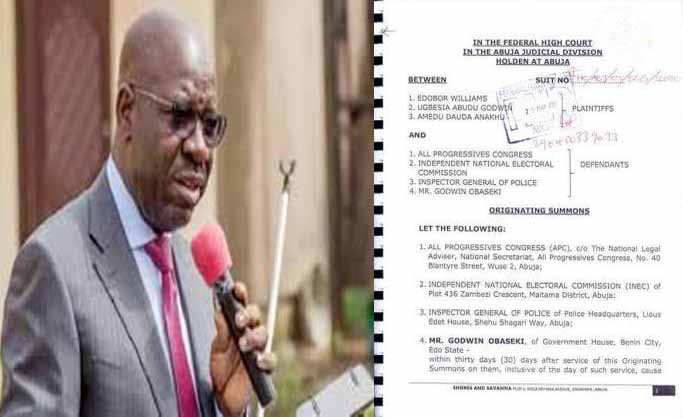 DESPITE the dismissal of the pre-election certificate forgery case brought against him by the All Progressives Congress, APC, a new twist to the Governor Godwin Obaseki certificate saga emerged on Monday at the Edo Governorship Election Tribunal.

At least three parties insisted that Obaseki has a case on the issue with the allegation that the U.I. certificate submitted in his 2016 election was different from that presented in 2020.

To prove its case on the matter, a forensic expert, Raphael Onwuzuligbo was brought in to testify on the issue.

Onwuzuligbo, a retired Assistant Superintendent of Police (ASP) appeared based on the subpoena by Action Democratic Party (ADP) and its governorship candidate, Iboi Emmanuel.

His claim was, however, challenged by the lawyers to the respondents. They included Chief Adegboyega Awomolo, SAN, INEC;  Rotimi Oguneso, SAN, PDP; Ken Mozia, SAN, Obaseki.

The APC candidate, Pastor Osagie Ize-Iyamu who stands to benefit from the case if the Obaseki certificate saga derails the governor’s election was also among the respondents.

Ize-Iyamu had chosen not to petition the outcome of the election, while his party, the APC focused on removing Obaseki through the alleged certificate forgery case.

The plaintiff, ADP is asking the tribunal to disqualify Obaseki upon the claims of the presentation of a forged certificate either in 2016 or in 2020 and order a fresh election in which the PDP would not be a participant.

The tribunal also on Monday heard similar petitions from the governorship candidate of New Nigeria Peoples Party (NNPP), Tracy Agol, who is also praying the tribunal to annul the election and order fresh election that will exclude Obaseki and the PDP.