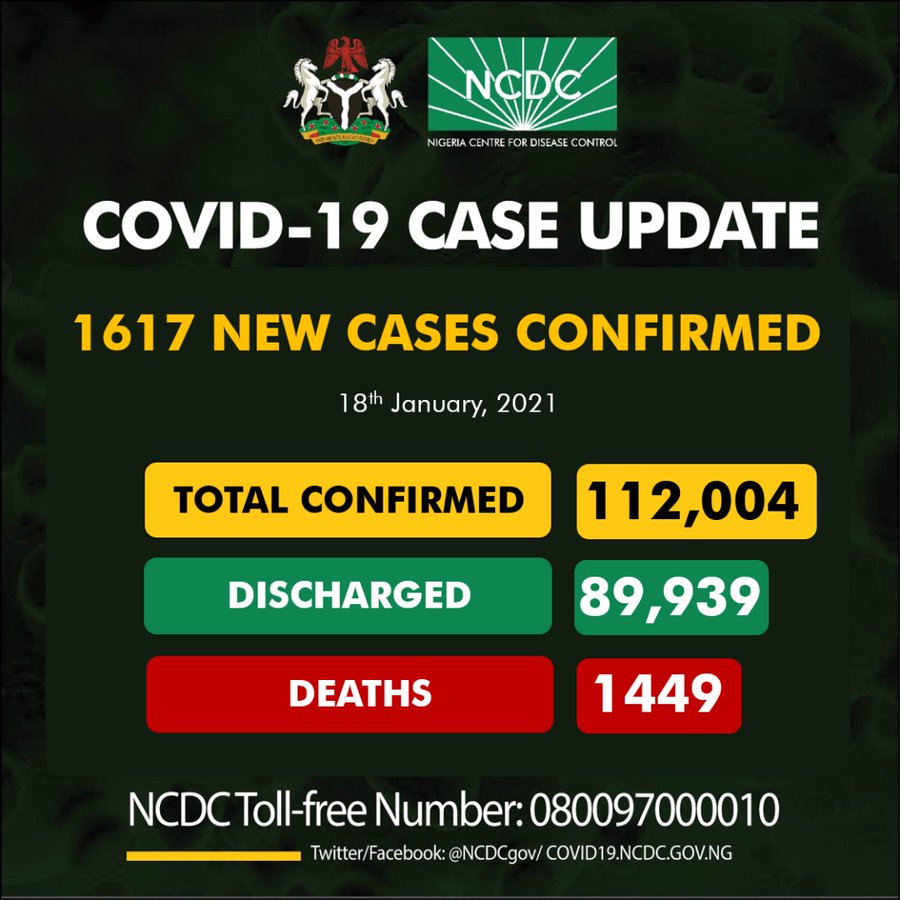 1617 new cases of COVID-19 in Nigeria were reported on Monday, January 18, 2021 the Nigeria Centre for Disease Control, NCDC said in a tweet on Monday night.

The new cases were reported in 17 states and the FCT.

The unabating spike in new cases GWG reports is bringing new thoughts of a total national lockdown in the country.

The Secretary to the Government of the Federation, SGF, Mr. Boss Mustapha gave the caution at the briefing of the Presidential Task Force, PTF on COVID-19 on Monday.

Besides, it also emerged that the Federal Government has released N10 billion for research into domestic production of the COVID-19 vaccine.

Lagos had the highest number of new cases reported on Monday with 776 new cases followed by Kaduna with 147 new cases and Kwara with 131 new cases.

GWG reports that the 1617 new cases of COVID-19 in Nigeria brought the total number of confirmed new cases in the country to 112,004 with 89,939 of the cases discharged.

There were 14 deaths related to the pandemic according to the NCDC which brought the total number of deaths to 1,449 deaths.

The breakdown of the new cases in the states is as follow:

Meanwhile, the minister of health, Dr. Osagie Ehanire has stated that the number of new COVID-19 cases had continued to rise in the country, such that 10,300 confirmed cases were reported from just 50,750 samples tested in one week, translating into 20 percent positivity rate.

“It means one out of every five persons tested in the last one week turned out positive, compared with the previous week which recorded a positivity rate of 14 percent.

“It is instructive of the second wave that all cases recorded so far this January is more than 20 percent of all confirmed cases in Nigeria, more than the whole of December, barely halfway through the month.

“There is no doubting the fact that we are deeply into the second wave of the pandemic which requires that PTF and FMoH review our strategies to respond to the challenge.