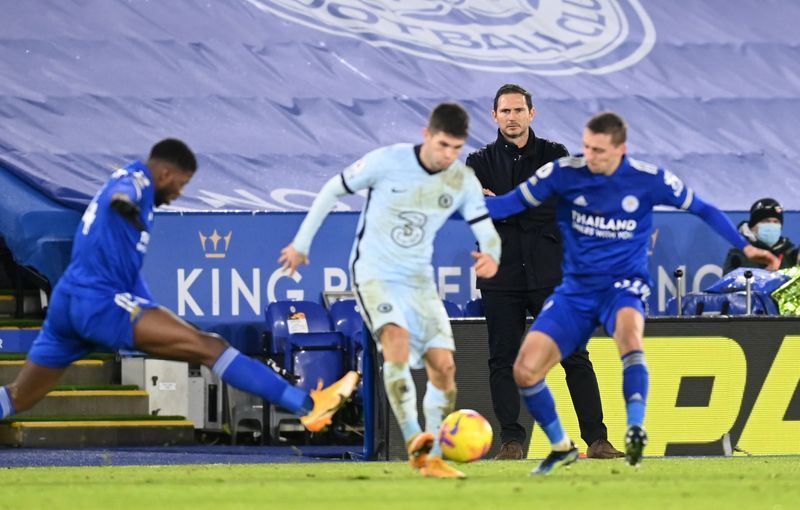 Wilfred Ndidi and his teammates had a good day at the office as they claimed a comfortable 2-0 win over Chelsea at the King Power Stadium for Leicester to go top of the Premier League table.

The Nigerian ace drew first blood six minutes into the game after a set piece routine by Leicester fell to Ndidi just on the edge of the box. Wilfred Ndidi who scored against Chelsea last season at Stamford Bridge, buried home using his weaker foot for his first Premier League goal since 2019. Albeit, the ball hit the inside of the post to go in.

Brendan Rodgers’ outfit showed that they were in the mood to tear Chelsea apart when James Maddison’s sublime strike came off the cross bar and went out with Edouard Mendy scrambling in the fifteenth minute.

In a bid to respond, marauding Chelsea right back, Reece James played straight at Peter Schmeichel who pushed the ball over the bar. From the resulting corner, Thiago Silva ran to the front post and directed his header towards Schmeichel’s net, but the Leicester shot-stopper was equal to the task.

A twenty-fifth-minute effort by Marc Albrighton was handled by Mendy, before Callum Hudson-Odoi fluffed a good chance to cancel out Ndidi’s opener. Jamie Vardy thought he will add to his goal count for the season, only for Mendy to stand big and prevent Vardy’s chip from going into the net.

Chelsea’s creative edge was efficacious as Pulisic drew a foul from Johnny Evans on the edge of the box. Subsequently, Mason Mount’s attempt went awfully wrong from a good position.

Almost immediately, James Maddison doubled Leicester’s advantage after a lob over the top from Marc Albrighton, he maximized Albrighton’s pass and slotted it beyond Mendy. That goal came five minutes into the break as the Foxes were in a jubilant mood and the Blues had headaches at half time.

Just as the second half commenced, James Justin should have piled more misery on Chelsea, however, his header let him down in the box. In the opposite end, an inviting delivery by Mason Mount met the head of Tammy Abraham who nodded tamely at Schmeichel.

Mendy’s outstretched legs denied Youri Tielemans in the 56th minute after Tielemans was picked out through a pitch of a pass from Jamie Vardy.

A fretting Frank Lampard threw on Timo Werner and Hakim Ziyech. Both combined well for a Timo Werner goal which didn’t count in the 85th minute. Ziyech will also try his luck from inside the box. Once again, Schmeichel stood big before the referee blew the final whistle.

This was Brendan Rodgers’s first win over Chelsea in the English top flight as his terrific Foxes have now joined the mix for the title race as the result helped Leicester to go top of the table. They are now league leaders with 38 points from 19 games.

How Pogba’s Stunner Returned Man U To The Top