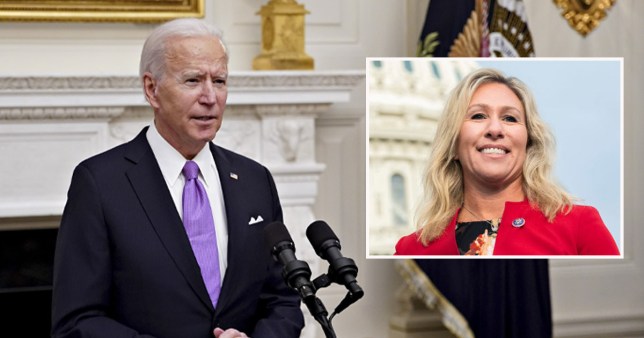 Rep. Marjorie Taylor Greene announced on twitter on Thursday that she has filed articles of impeachment against President Joe Biden.

“I just filed articles of impeachment on President Joe Biden,” the lawmaker said in a video posted to Twitter. “We’ll see how this goes.”

In a statement posted on Twitter by Greene, the impeachment articles are based on Biden’s “corrupt actions involving his quid pro quo in Ukraine and his abuse of power by allowing his son, Hunter Biden, to siphon off cash from America’s greatest enemies Russia and China.”

“President Joe Biden is unfit to hold the office of the Presidency. His pattern of abuse of power as President [Barack] Obama’s Vice President is lengthy and disturbing,” Rep. Greene said.

“President Biden is even on tape admitting to a quid pro quo with the Ukrainian government threatening to withhold $1,000,000,000 in foreign aid if they did not do his bidding.

“President Biden residing in the White House is a threat to national security and he must be immediately impeached.”

Biden Faces Impeachment In The Hands Of Pro-Trump Congresswoman

She also listed other issues for backing her call for the two day president to be impeached.

Her move is coming as Congress considers whether to proceed with pushing the conviction of former President Donald Trump in the Senate.

The House had last week impeached Trump for the second time after he was accused of rallying his supporters to break the precincts of the Capitol and invading the legislative chambers.

It is perceived that the move by the well known pro-Trump legislator could rile Democrats in the Senate to take up the impeachment trial of Trump with a possible conviction.

A conviction for Trump in the Senate could impair whatever hopes he has towards a comeback in 2024 as envisaged.