FG Says COVID 19 Vaccine Is Optional, No Nigerian Will Be Mandated To Take It.

WHO Gives Update On End Of COVID-19 Pandemic 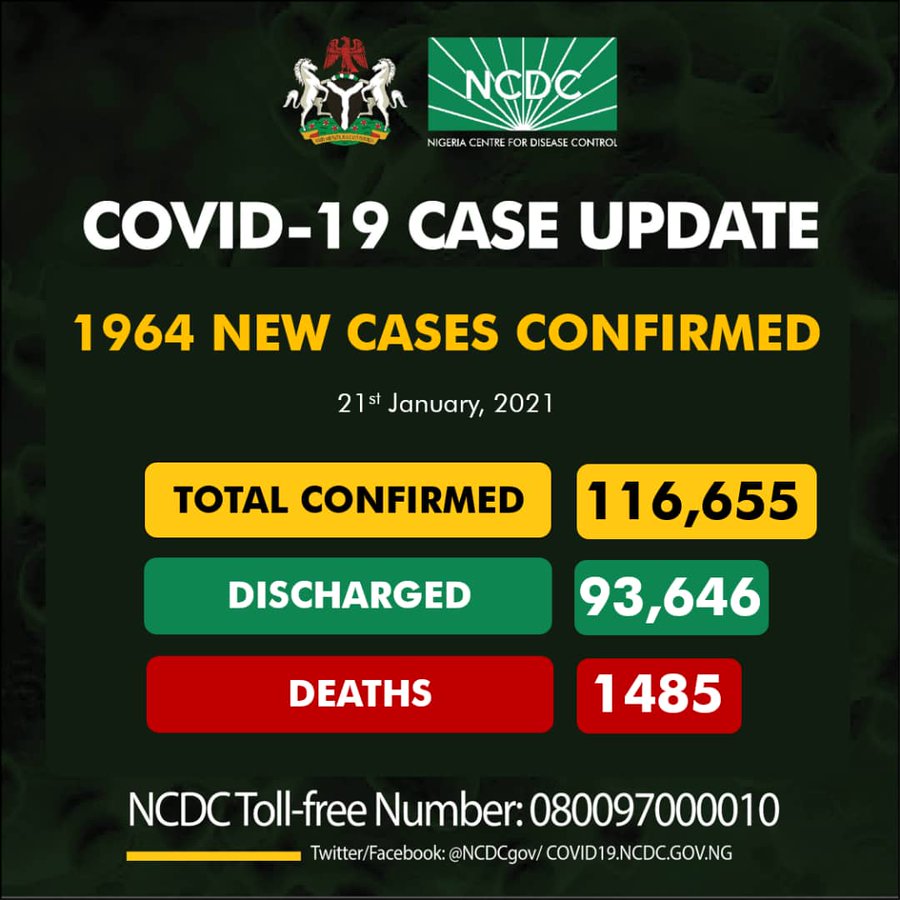 A new peak of COVID-19 in Nigeria emerged on Thursday after 1964 new cases were reported by the Nigeria Centre for Disease Control, NCDC.

The new cases on Thursday brought the total number of infections confirmed in the country to 116,655 with 93,646 cases discharged.

7 deaths on Thursday brought the total number of deaths recorded in the country on account of the pandemic to 1,485.

The 1964 new cases were recorded in 23 states and the FCT with Lagos, the epicenter of the disease registering 824 new cases. It was followed by the FCT with 246 new cases and Plateau State with 166 New Cases.

The new peak of COVID-19 in Nigeria came from the 1964 cases below:

The new peak of COVID-19 in Nigeria came as Governor Abdullahi Ganduje of Kano State has urged market leaders, transport unions and tricycle operators to comply with COVID-19 protocols to stem the spread of the virus in the state.

The state governor met with the stakeholders on Thursday at the Government House, Kano.

Ganduje urged both leaders and members of the associations to adhere to all preventive protocols and other precautionary measures stipulated to curb the spread of the virus by residents of Kano.

The governor, who was represented by his deputy, Alhaji Nasiru Gawuna, attributed the rising cases of infection to the poor attitude and perception of the people on the virus.

Earlier, Dr Sabitu Shanono, the Deputy Coordinator, Technical Response of the state taskforce on COVID -19, said the state had recorded 5,083 contact tracing, adding that there were 61,997 suspected cases.

He said the state had also recorded 2,636 confirmed cases with 2,276 discharged.

He, however, lamented that the state was facing the challenge of poor public compliance to Infection Prevention and Control (IPC) protocols, as residents were not properly observing safety measures.

According to him, the state recorded 17 deaths and 827 new cases in two months.

Shanono revealed that the state had also recorded 72 deaths since the outbreak of the pandemic.