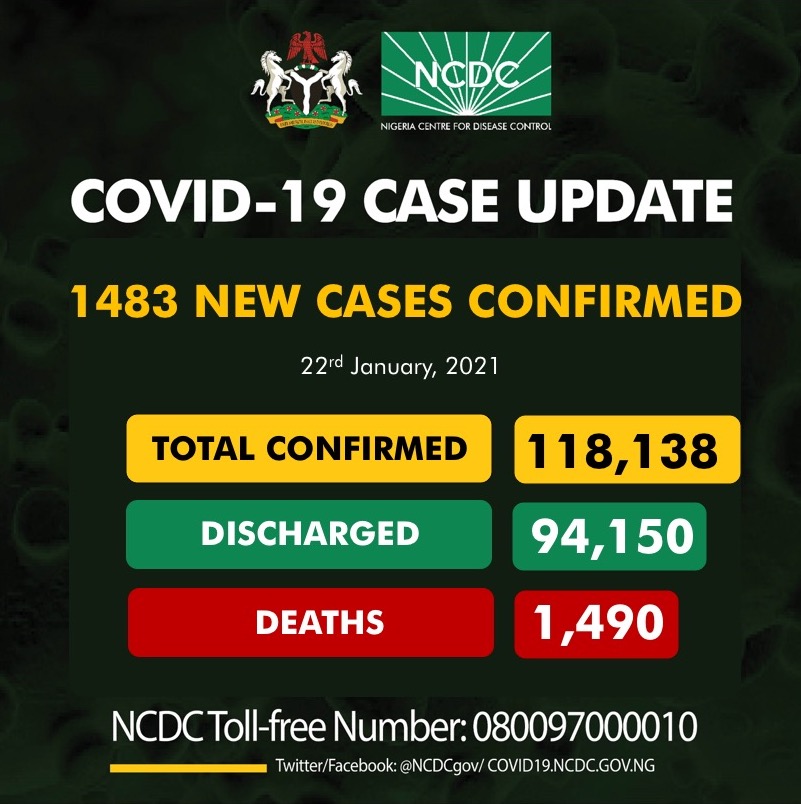 The Nigeria Centre for Disease Control (NCDC) has recorded 1,483  cases of COVID-19, bringing the total number of infections in the country to 118,138. The report was without Lagos.

The NCDC disclosed this on its official website  on Friday.

The public health agency also confirmed additional five coronavirus-related deaths in the last 24 hours, bringing the death toll in the country to 1,490.

The NCDC said that the new infections were from 22 states and the Federal Capital Territory (FCT).

GWG reports that the day’s compilation was without Lagos State.

It stated that Kaduna state reported the highest number of infections with 545 new cases, raising the tally of cases in the state to 7,176 and 56 deaths.

The NCDC said: “On Thursday, we erroneously reported one new case, instead of three new cases for Zamfara State.”

“Friday’s report does not include data from Lagos State,” it said.

No reason was given why the day’s compilation was without Lagos State.

The public health institute noted that 504 people have been successfully treated and discharged from various isolation centers in the country.

The News Agency of Nigeria (NAN) reports that the country has so far tested 1,225,179 people since the first confirmed case of COVID-19 was recorded on Feb. 27, 2020 in the country.

UNICAL Fumigates Ahead Of Resumption

8 Convicted For Not Wearing Facemasks In Edo