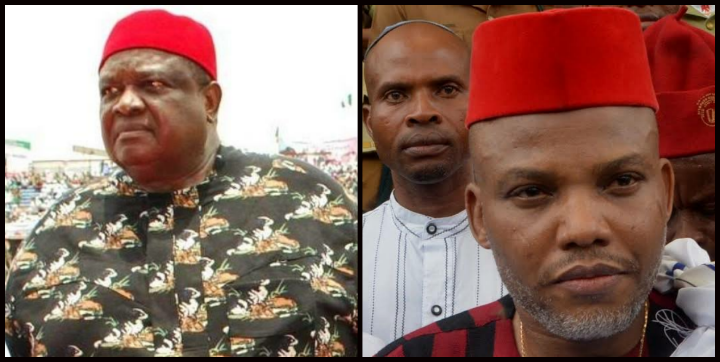 THE Indigenous People of Biafra, IPOB, has chided Chief Emmanuel Iwuanyanwu over his criticism of the group describing him as one of the reasons for the underdevelopment of Igboland. IPOB particularly picked out Iwunanyanwu over failed road projects it alleged were associated with him.

The IPOB reaction follows Iwuanyanwu’s recent admonition of the group.

GWG had reported that Iwunanyanwu had flayed the group for endangering Igbo investments outside of the Southeast which he estimated at $2 trillion.

But reacting through its spokesman, Emma Powerful, IPOB said:

“Chief Emmanuel Iwuanyanwu should be reminded that he is one of the reasons Alaigbo is underdeveloped. His treachery and greed contributed hugely in retarding development of Igbo land.

“How many federal contracts were awarded to him for execution in South-East especially road projects? How many of them did he faithfully execute?

“In case he doesn’t know, the current crop of Igbo youths are wise enough to identify true Igbo elders, and Iwuanyanwu is not anywhere close on the list. His chameleonic tricks can no longer work under the current dispensation.

“We are not surprised at such loose and careless remark coming from a supposed elder like Iwuanyanwu who has always taken political advantage of every matter.

“He is only after protecting his wealth and investment, and certainly not speaking for Igbo interest.

”We advise Iwuanyanwu to stop advertising his ignorance of global economics by giving fake analysis of Igbo investments in Nigeria. We are aware, and it’s a public knowledge that the economic power of 54 African countries will come to $26 trillion by the year 2056.

“With this verifiable statistics, one then wonders where Iwuanyanwu is getting his fake claims that Igbo investments in Nigeria is already worth over $12 trillion.

“Therefore, Emmanuel Iwuanyawu must get his records straight before coming out in public to make unverified analysis about Igbo economic power. Besides, no matter the amount of investment Ndigbo have in Nigeria, nothing guarantees its safety under the current political structure of the country.

“In case Iwuanyanwu and his likes do not know, Ndigbo have remained the most endangered species in Nigeria. Their business interests and investment have remained the target of every evil policy in the country.

“The torrents of barbaric and unprovoked attacks against Igbo, their investments and business interests in different parts of Nigeria predate IPOB.

“Who then will Iwuanyanwu say exposed Igbo investments to those attacks? Was it Kanu or IPOB that caused the genocidal attacks on Igbo that led to the civil war in 1967?”