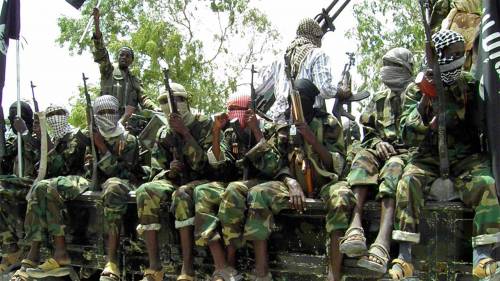 Boko Haram operatives on Sunday abducted two policemen after killing another two policemen during an offensive launched as the new Chief of Defence Staff and all three service chiefs made their first visit to Maiduguri.

The policemen were attacked in Chabal and areas around Magumeri Local Government Area of Borno State.

The terrorists were also reported to have during an ambush seized two patrol Vehicles and set ablaze another vehicle belonging to the police along Maiduguri-Chabal- Magumeri 35km Road north of the state capital.

“The insurgents went away with two patrol vehicles after setting ablaze on the vehicle, while the dead bodies of the policemen were conveyed to Maiduguri with one injured Police Officer now receiving treatment at an undisclosed hospital in Maiduguri,” a source told Vanguard.

Chabal which was attacked is about 22km from Maimalari Cantonment, 7 Div Nigerian Army, Maiduguri where the service chiefs interacted with officers and men of the forces engaged in the combat against Boko Haram.