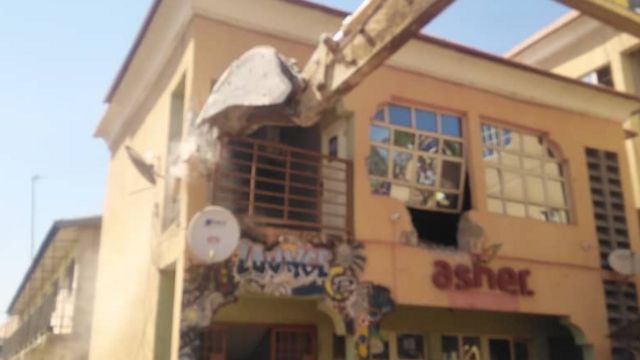 The police on Monday rebuffed claims of a sex party in Asher Restaurant as alleged by officials of the Kaduna State Government. The police claim of no sex party in the flattened Kaduna restaurant was made at the trial of five men arraigned over the fiasco.

Testifying in court two policemen involved in the raid of the restaurant said that they did not witness any sex party, though they admitted the presence of a large number of persons in the restaurant many of whom did not observe social distancing.

GWG had reported officials of the Kaduna State Government as alleging that Asher Restaurant and Lounge was the venue of a sex party the reason which was initially given for the demolition of the building housing the restaurant.

The police rebuttal came at the trial of the suspects apprehended in connection with what was termed the Kaduna Sex Party.

The five arraigned were Mr. Abraham Alberah, Umar Rufai and Suleiman Lemona, Chimezie Kenneth, who organised the party and Marvellous Akpan, who disseminated the information were also in court.

Led by the police prosecutor, ASP Shola Olodowa, two of the police witnesses, ASP Alfa Yahaya and Corporal Ibrahim Adamu who were involved in the invasion of Asher Restaurant and Lounge while giving slightly different contradictory evidence on how the operation was carried out, however, agreed that there was no sex party at the flattened Kaduna restaurant.

While ASP Olodowa said they invaded the restaurant premises with two Hilux vehicles, Adamu said that they went with three. They were, however, agreed that there was no sex party in the demolished restaurant.

ASP Yahaya said: ” When we got there, we saw crowd of people more than 50 not observing social distancing, not wearing face masks, no provision of hand sanitizers with many of them half naked, drinking and playing loud music who jumped the fence when they sighted the presence of police, we arrested the organizer and the two DJ’s and took them to our station.

Adamu on the other hand said that he was alerted about an operation to abort a sex party and that the officer in charge sent him a flyer of the sex party on his mobile phone through WhatsApp.

”The flyer did not carry any venue, then another chat indicated that it was going to be at Asher restaurant and lounge. When we arrested three of the respondent, they wrote their statement which I read to them and we both signed.

“We went there with 3 Hilux vehicles with 5 personnel in each of the Hilux and when we got there there was no sex party taking place there. The phone number on the flyer when tracked belonging to one Marvellous Akpan who accepted designing the flyer along with his friends.”

The police witness testified that the restaurant had nothing to do with the flyer saying “but I saw the 2nd respondent Abraham Alberah there but properly dressed in caftan”.

The presiding Judge, Chief Magistrate Benjamin Hassan adjourned to the 22nd February, 2021 for continuation of hearing while the bail granted the suspects continues.

Following the submissions, the Chief Magistrate adjourned further hearings on the case to February 22, 2021.