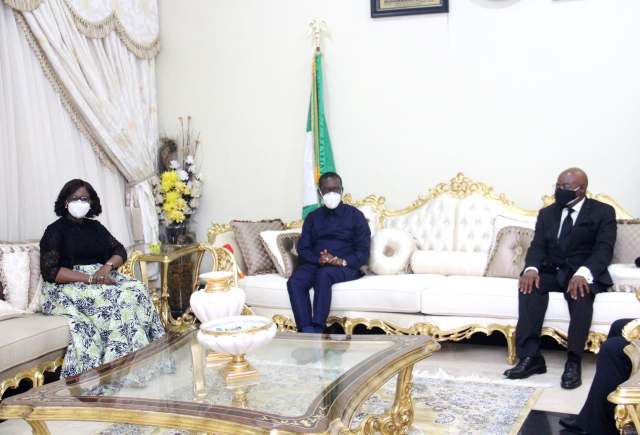 Gov. Ifeanyi Okowa of Delta, has commended the Chairman of Zenith Bank PLC, Mr Jim Ovia, for his contributions to humanity and the development of Nigeria.

The governor, gave the commendation on Wednesday, at the Government House, Asaba, when Ovia paid him a condolence visit over the death of his father, Sir Arthur Okorie Okowa.

He said the Zenith chairman had contributed immensely in making life better for Nigerians, especially in Delta, and urged him not to relent.

Okowa appealed to wealthy Nigerians to use their God given resources to make life more meaningful for the people.

He thanked Ovia for the visit, saying “I am very happy about this condolence visit, even when you have spoken with me on the phone.

“We give thanks to God for it has pleased Him to call our father home, because He gave him the opportunity to live a full life at the age of 88 and we cannot but say ‘thank you to God.’

“We are consoled by the fact that during the course of his life, he had the opportunity to make his own mark as a school teacher, in the political arena where he was my great adviser and also as a community leader, where he played his role.

“In the church, the Anglican Communion, he played several roles and was a Knight of the Communion. So, we are glad that he has lived a full life and we give honour and glory to God.

“Since he passed on, we have had lots of condolence messages and visits, it shows how much love people have for my family and your visit here today is something we truly appreciate as a family,” he said.

“I know that you are doing a lot but I pray that God will give you the enablement to continue to make your contributions to our people, to our state and our nation.”

Earlier, Mr Ovia, accompanied by the Executive Director of the bank, Mr Dennis Olisa and Group Zonal Head in Delta, Mr Lucky Ighade, said he was in Asaba to pay his condolences to the governor and his family on the passing of their father.

He pledged the support of the bank towards giving the late patriarch of the Okowa family a deserved funeral.