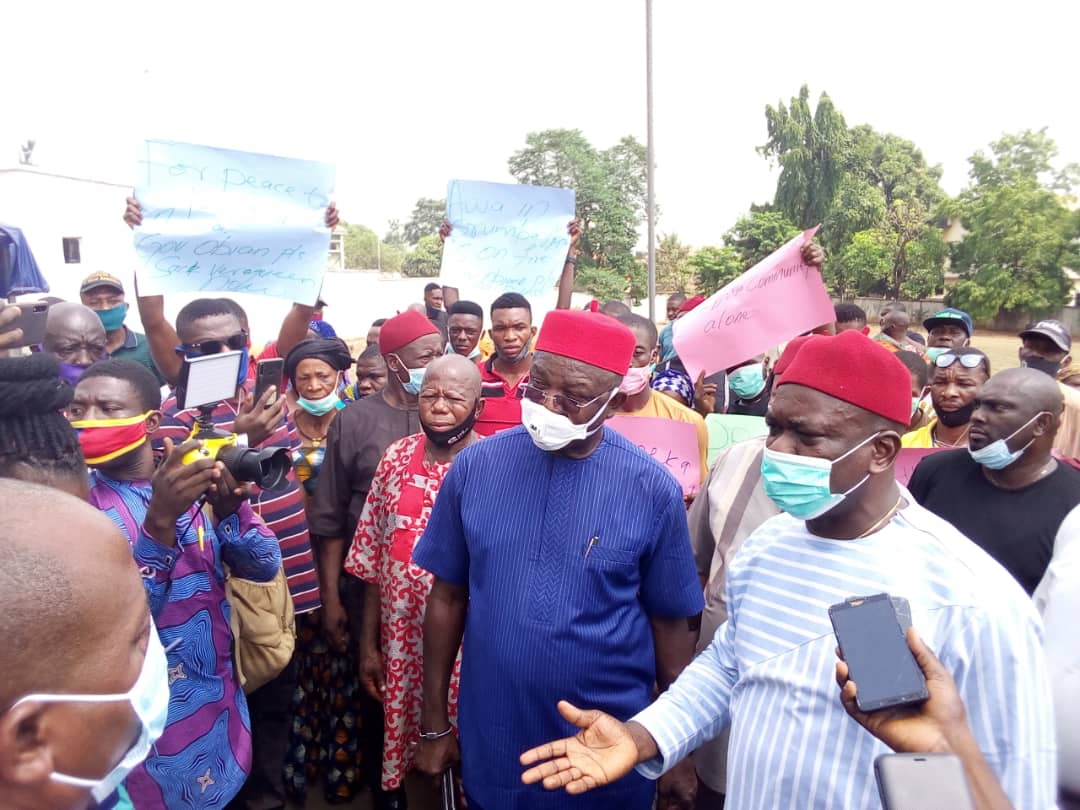 The people of Awa Town in Orumba North Local Government Area of Anambra has urged Gov. Willie Obiano to save the community from an impending crisis over an attempt to impose a traditional ruler on them.

The people, on Wednesday at the Government House, Awka, cried out against the proposed traditional ruler election slated for Feb. 13.

The protesters bore placards with varying inscriptions ‘Awa Is On Fire’, ‘Gov Obiano We Need Your Intervention In Awa Now’ and ‘Your Excellency Sack Vera Queen’.

Others were ‘Awa Community Says No To Feb. 13 Election’, Your Excellency Awa Community Is Boiling’ and “Hon Emeka Aforka Should Leave Awa Alone“, among others.

Speaking on behalf of the protesters, Chief Ambrose Egwuonwu, an elder in the community, said ascendancy to the traditional stool was hereditary and not open to the entire community or election.

Egwuonwu said Awa was a small and peaceful community but wondered why some influential people would want to throw the community into a perpetual crisis.

He said the government should intervene and stop the election from going on because it was not a decision of the majority in view of the fact that every issue surrounding the emergence of a new traditional ruler had yet to be addressed.

Chief Paul Nwafor, a former President-General of the community, said they were told to prepare for an election on Feb. 13 based on a letter from government  “a copy of which we have not seen.’’.

Nwafor said the community needed a traditional ruler but it must follow due process.

He said it was the duty of the community to elect a traditional ruler and not for the government to impose anyone, adding that there was unhealthy political undertone behind the desperate effort to conduct an election in Awa.

Responding, Mr Henry Nwasike, the Public Relations Officer in the Ministry of Local Government and Town Union Affairs, said that the protesters grievances were well noted.

Nwasike, who spoke on behalf of the commissioner, said the administration of Gov. Obiano would do all that was necessarily to ensure that there was peace in every community.

He said government did not conduct traditional ruler election for community but supervised it, assuring that their grievances would be communicated to the appropriate authorities.

Dr Ray Ofor, President-General of Awa, said the protesters had contradicted themselves by claiming they were not aware of the election notice but had gone ahead to protest against it.

Ofor, however, said they were waiting for further directive based on government’s reaction to the protest on whether to proceed with the election. (NAN)