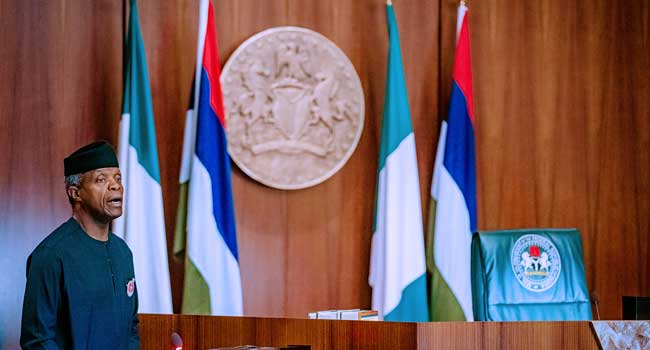 Vice-President Yemi Osinbajo presided over a meeting of the National Economic Council (NEC) on Thursday in Abuja.

CWG reports that it was the first physical meeting of the Council since the COVID-19 lockdown of 2020.

The Council had been holding virtual meetings in compliance with safety protocols issued by the Nigeria Centre for Disease Control (NCDC).

Constitutionally, the vice-president (Osinbajo) is the chairman of NEC, which meets monthly to deliberate on the coordination of economic planning and programmes of various levels of government.

NEC is made up of the 36 state governors, the CBN Governor, Minister of Finance and the Head of the Civil Service of Federation.

Other members are the Secretary to Government of the Federation and relevant government officials whose duties hinge on the economy.

He said governors would give full support to the military and other security agencies in the fight against all forms of crimes.

Obaseki Clears The Air On Edo Land For Herdsmen