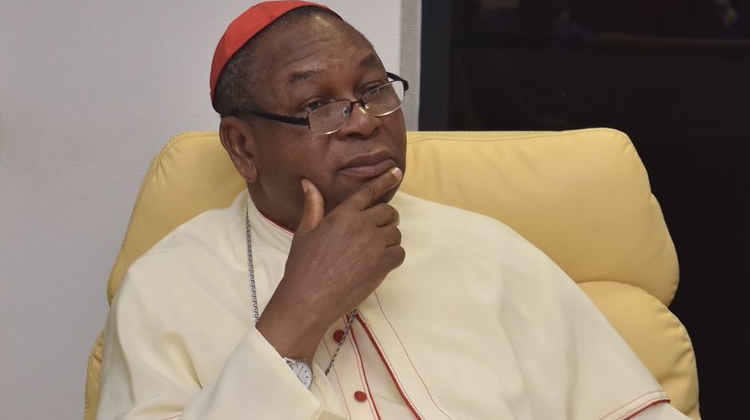 Immediate past Catholic Archbishop of Abuja, Cardinal John Onaiyekan has said that it is wrong for the government to talk about dialogue with the bandits adding that the government should leave the stage if it can no longer secure the lives of the people.

GreenWhiteGreen GWG reports that they Onaiyekan revealed this in an interview with newsmen in Minna after the ordination of the Auxillary Bishop of Minna Diocese.

Onaiyekan said that government should stop pretending that they are the ones ruling as non-state actors have taken over the country.

He stated that government have no excuse for the continuous insecurity that is bedevilling parts of the country stressing that if the government do not take a definite step, there will be a revolt that would be dangerous to the people.

“And government agencies are talking about reaching out to them. It is not the right thing to do. It is about time we have a government that takes care of its people.

“Sadly, we have people who claim to be our leaders who during elections forced us, begged us and cajoled us to put them in power, now that they are in power, do your work for goodness sake,” Onaiyekan said.

The former President of the Catholic Bishops’ Conference of Nigeria and Archbishop of Abuja states that the fight against banditry and criminality in the country is not political, ethical or religious adding that it is deeper than that.

“If the government cannot secure the lives of the people, they should call for a kind of national cohesion. They should stop pretending that they are the one’s ruling. In some countries when these incidents happen, it gets to a stage where the government will call for national unity where everyone comes on board to proffer solutions.

“If the government continues this way, it will get to a stage where non-state actors will take over.”

Onaiyekan stressed that the government have no excuse for what is currently happening in the country saying that they should stop giving excuses.

“There is no excuse whatsoever for not doing the work they promised to do. No excuse that people are coming from outside the country and they find it easy to come in with guns and ammunition.”

Onaiyekan further stated that if there are plans from any quarters to destroy the country, it would not work.

“If people are planning to destroy this country so that they can take over, it cannot work. It is not possible. If the government does not act, it won’t be long before there is a reaction from Nigerians and we pray that it will be peaceful,” Onaiyekan noted.