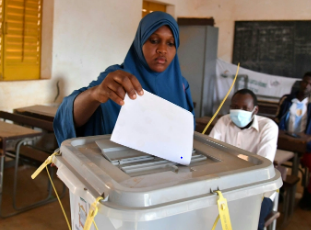 Niger’s 7.4 million registered voters return to the polls on Sunday in a presidential run-off to elect a president between the two front runners from the 27 December first-round vote.

Former foreign minister Mohamed Bazoum, 61, received about 40% of the votes in the first round against 16.9% by second-placed former President Mahamane Ousmane, 71.

The second round became inevitable because none of the 30 candidates in the first round got more than 50% of the votes required by the constitution to win the presidency.

The West African country is notorious for political instability, including military coups. It currently endures crises related to climate change and insecurity from militant groups, including Boko Haram and ISIS West Africa.

Related Topics:Presidential Run-Off
Up Next