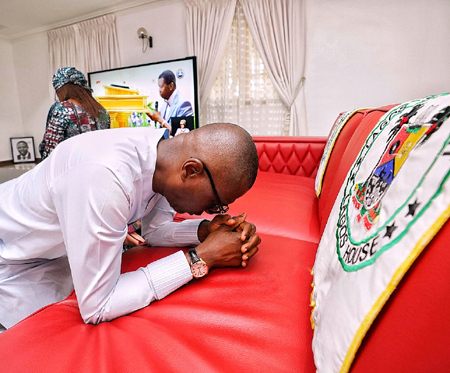 Governor Babajide Sanwo-Olu of Lagos State on Saturday cautioned religious leaders and opinion moulders against reckless utterances that could further aggravate the security crises in the country.

Sanwo-Olu gave the admonition at the 2021 Lagos State Interdenominational Divine Service organised by the Christian Association of Nigeria (CAN) at the Apostolic Church, Ketu.

The governor said the nature of the crises required all religious leaders to refrain from making incendiary comments that could stoke divisions and violence.

According to him, a crisis in Nigeria will be catastrophic for Africa.

He said the nation had faced a difficult period in the past year following economic downturn occasioned by the outbreak of COVID-19 and accentuated by youth restiveness.

Sanwo-Olu, who said Lagos State became the epicentre of the crises, which kept the government on its toes, stressed that religious leaders must use their pulpits to preach peace and discourage war.

The governor said it was time citizens came together and gave Nigeria the new beginning it deserved in surmounting contemporary challenges.

“It is time for sober reflection that must bring a new beginning for our nation. We have all witnessed the challenges of our country, but we need to be careful not to turn the observed crises into ethnic or religious war.

“We need to guard against utterances that may stereotype anyone or tribes. We have a duty to isolate criminals in our communities rather than introducing tribal spin into every crime.

“Nigeria is the largest country in Africa. Where will we go to?

“That’s why I said we need a new beginning and there are no other people that can help us lower the temperature and calm frayed nerves than our religious leaders whose voices are well respected,’’ he said.

The governor told the religious leaders that Nigerians must not add political instability to the many battles the country was fighting.

Sanwo-Olu said that the crises bedevilling the nation required collective action from every segment of the country toward evolving solutions.

He told the religious leaders that in spite the COVID-19 crisis and the destruction that trailed the #EndSARS protest in 2020, Lagos had weathered the storm with strong determination to sustain the progress it recorded.

He commended religious leaders for sustaining Lagos State with prayers, and particularly praised CAN for its spiritual support towards his administration.

“As a government, we will continue to play our part and deliver projects that are critical to the socio-economic wellbeing of the people.

“The duty of CAN and our church leaders is to continue to support us with prayers and populate messages that promote unity within our communities and state,’’ Sanwo-Olu said.

The Southwest leader of CAN, Rev. Fr. Raphael Osegboun, decorated Sanwo-Olu as Grand Patron of the Lagos chapter of the association.

Osegboun said that the appointment was based on the Christian body’s resolve to naturally fill the position with any sitting governor of Christian faith.

The theme of this years’ service is:  “A New Beginning, A New Dawn and A New Glory,’’