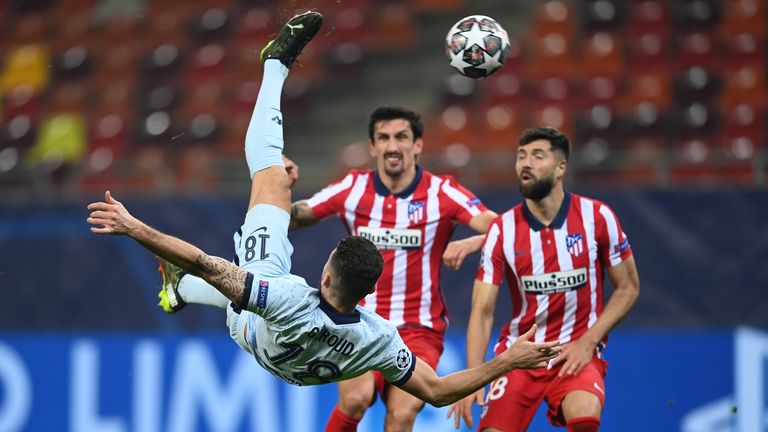 La Liga league leaders, Atletico Madrid battled against a recuperating Chelsea side on Tuesday night at Bucharest as Olivier Giroud’s stunner of an overhead kick handed Chelsea an important 1-0 win.

Diego Simeone’s Atletico Madrid which are known for their defensive style of football didn’t deviate from their usual strategy by soaking the pressure from Thomas Tuchel’s Blues.

On the other hand, Chelsea weren’t charitable at the back by making sure the lethal pair of Joao Felix and Luis Suarez weren’t presented with any goalscoring opportunity.

Timo Werner’s two attempts in the first half, one of which was saved by Oblak between the sticks for Atletico and his failure to latch on to a Mason Mount cross were the only major opportunities in the first half as both sides were level without goals.

Second half action saw both sides become more energetic on the ball. That prompted Joao Felix to test Chelsea’s goal with an overhead kick which went well over the bar. That may have also inspired Olivier Giroud’s stunner who put Chelsea’s noses in front in the 67th minute.

It was initially chalked off for offside, but after a thorough check by the VAR, the goal was given. That would be the last act of a ball going into the back of the net as Chelsea saw out the cagey encounter to edge Atletico. The goal is of huge magnitude as Chelsea go into the reverse fixture with an away goal, courtesy of a moment of magic produced by their big French striker.

Giroud’s stunner in the form of an overhead kick was what changed the balances as Chelsea went in front of the La Liga leaders.

Elsewhere, defending champions Bayern Munich outplayed Lazio by 4 goals to 1 at the Stadio Olimpico to continue their title defense imperiously. The win was also memorable for Bayern’s Bayern Munich star Robert Lewandowski who became the third-top scorer in Champions League history with his opening goal against Lazio.