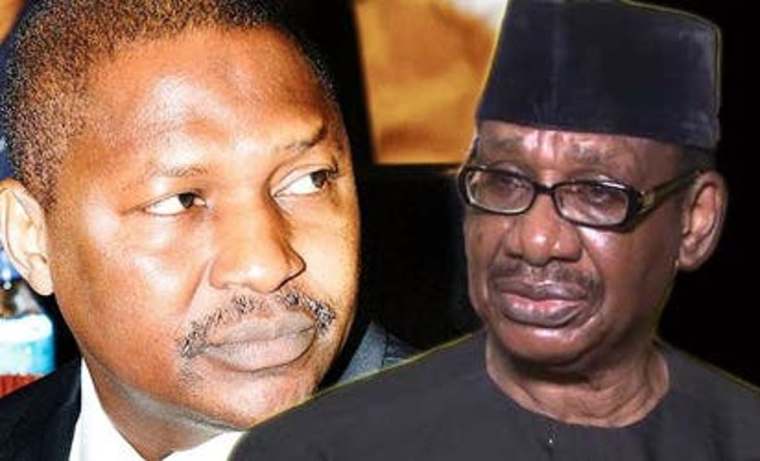 A war has broken out within the inner caucus of the Muhammadu Buhari regime over the direction of the anti-graft war. It has now emerged that the anti-graft war has split Buhari’s men at the driving seat of the ethical campaign.

The development follows increasing claims that the Attorney General of the Federation and Minister of Justice, Mr. Abubakar Malami, SAN has positioned himself to take full control of the Economic and Financial Crimes Commission, EFCC.

In the latest development, the Chairman, Presidential Advisory Committee Against Corruption, Prof. Itse Sagay (SAN) has accused Malami of setting the stage to dictate to the EFCC through the appointment of Abdulrasheed Bawa as the new chairman of the Economic and Financial Crimes Commission, EFCC.

Speaking against the background of reports of a family relationship between Bawa and Malami and the AGF’s alleged efforts in dictating to the anti-graft agencies, Sagay said he was not cheerful with the advent of Bawa.

Sagay spoke to The Punch following the Senate confirmation of Bawa as the new EFCC chairman.

“This issue is a very big question because I noticed that they both come from the same state of Kebbi and they may even be related. For me, that is not a very healthy thing because the chairman of the EFCC and the EFCC are supposed to be independent,” he said in a tone that reflected that the anti-graft war has split Buhari’s men.

“So, in such a situation, if Bawa is related to the attorney-general, then there will be a problem because he will not be able to do his job freely because the attorney-general will certainly interfere. He has already indicated his tendency to interfere in both the EFCC and the ICPC with the regulations he purported to make months ago. So, I am not comfortable at all that the possibility that they might be related.”

In a tone showing that the anti-graft war has split Buhari’s men, Sagay said:

“Malami has never been inclined to allow the anti-corruption agencies to operate freely. He is always sitting on their neck one way or the other. I have complained about that several times and nothing has happened. In fact, he has become more powerful. So, I will not be comfortable if they are related. I don’t want any outside influence on the EFCC or the ICPC.”

“I don’t really know him. I have just read what has been said about him and he seems to have impressive credentials and a fairly good record from what I read apart from this issue of trucks which the EFCC has denied on his behalf.

“So, inasmuch as the removal of Magu to me looks unsatisfactory, we have to move on and if he is as good as his credentials indicate, then I think the future looks promising for the EFCC.”