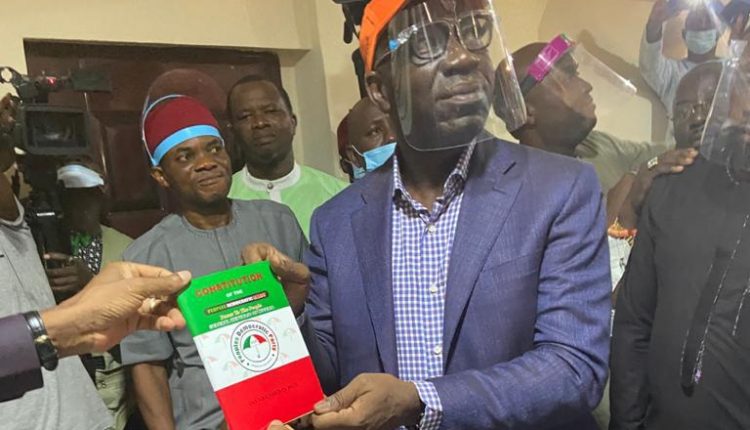 The breakaway faction of the All Progressives Congress (APC) in Edo State which defected with Godwin Obaseki into the Peoples Democratic Party, PDP says it is still to be integrated into the ruling party in the state. Indeed, the PDP is still suspicious of Obaseki’s supporters, it was alleged.

Mr. Anselm Ojezua, the chairman of the faction disclosed this in an interview with the News Agency of Nigeria (NAN) on Thursday in Benin.

NAN reports that Ojezua had led his faction on defection to the PDP in the build-up to the Sept. 19, 2020 governorship election to declare support for Gov. Godwin Obaseki.

Ojezua, however, told NAN that such resentment was normal in politics.

“It has not been an all rosy situation.

“ I noticed that there is still some level of reservations, mistrust, distrust, suspicion.

“But all these are normal in politics once there is a huge political development as it had been experienced in Edo. Naturally, you have such symptoms,” he said of the claim that the PDP was suspicious of Obaseki’s supporters.

“I am confident that the leadership of both groups will have the capacity to deal with it because it is about confidence building since we have a common interest.

“I believe that common interest is enough to build the confidence that we need and we are working around that,’’ Ojezua told NAN.

He explained that those who recently joined the party were waiting for when the membership registration of the party would begin, to be able to register en-mass.

“People are waiting to see what we will ask for in terms of where we are going.

“When PDP starts to register, you will feel it

“Initially, the expectation was that the PDP was on the verge of massive registration of members but that has not happened because the national body has a plan for the exercise.

“To that extent, we have to wait and I’m satisfied that we still have the confidence of our members.’’

The former Edo APC chairman told NAN that he was hopeful for a smooth-running arrangement for further engagement with the state government.