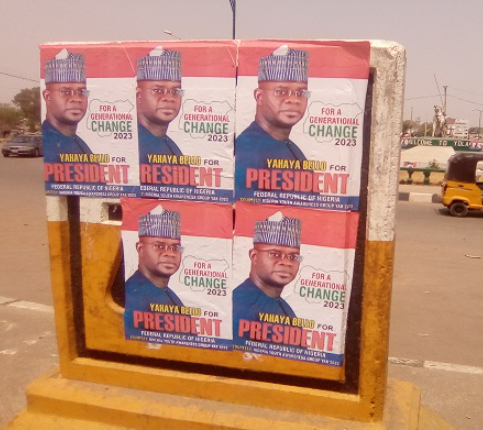 Multiple campaign posters of Governor Yahaya Bello of Kogi State as an aspirant for the Presidency come 2023 have flooded Yola, in Adamawa State.

The posters which were visible in strategic parts of the Adamawa State capital, Yola, were visibly campaign materials, indicating Yahaya Bello as a fitting personality to be Nigeria’s next president.

The posters as coined by its proponents made apparent reference to his relative young age, as one of the posters reads, ‘For a Generational Change 2023, Yahaya Bello for President’

The proponents of the posters, the Nigerian Youth Awareness Group, flooded very part of Yola as they pasted the posters on electricity and street light polls, roundabout walls, on disused signs and billboards, and on about any available space available.

The posters as at Thursday, were conspicuous in several places along Numan-Yola Road, especially around the section of the road at the International Airport, Yola; as well as PZ Junction, otherwise called Old Welcome to Yola and Maidoki Roundabout.