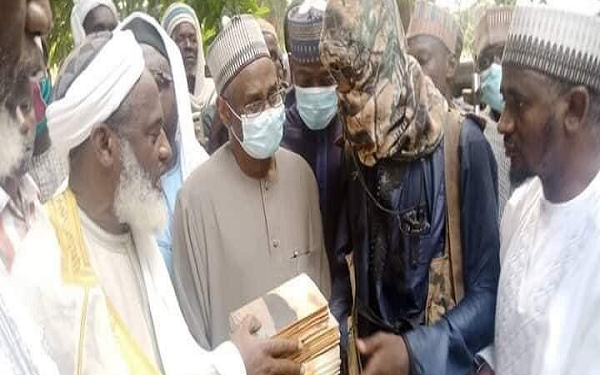 Leading Islamic scholar, Sheik Abubakar Gumi, has rebuffed critics of his amnesty plea for bandits saying that if Nigeria could pardon coup plotters and architects of the civil war that it would as well do same to the bandits.

Gumi who has been leading efforts to woo bandits back to society with his plea for amnesty said that refusing to take the option of making peace with the bandits would be dangerous for the country.

GreenWhiteGreen GWG reports that Gumi has drawn criticisms from far and near over his proposal from the two leading faiths in the country.

Reacting to the criticisms against his proposal, Gumi said:

“I see no reason why we can not accept their (bandits) repentance and give them amnesty. You ask why do we give them amnesty but they told us specifically that they are ready to drop their arms and they don’t want to be pursued with legal actions after they repented.

“If the country could pardon coup plotters who committed treasonable offences in the era of military administration, the bandits can as well enjoy similar forgiveness even better under democratic rule,” Gumi said.

Rebuffing the criticism of the Christian Association of Nigeria, CAN that he was enabling the bandits among others, he said:

“These people in the bush who have taken arms, they are criminals. I wonder who is not a criminal. Since Nigeria forgave coup plotters, forgave those that killed. Even those that instigated civil war; civil war that millions of people died, I see no reason why we can not accept their repentance.

“Since that is the bottle-neck and it is only the federal government that can give them that leverage. And strangely we found out that they are victims too. They were victims of profiling. So many of them were arrested and punished just for looking like herdsmen.

“Nigerians should embrace each other and live in peace. We should not try to do anything that will cause havoc. I will also call on the press to desist from sensational reporting because this nation is already in flames.

“You should be very careful in what you report. What you see. Continue reporting responsibly and you should not stir the Christian brethren who are known to be peaceful and law-abiding. We have been together for long and nobody can separate us, we should learn to live together in peace.”