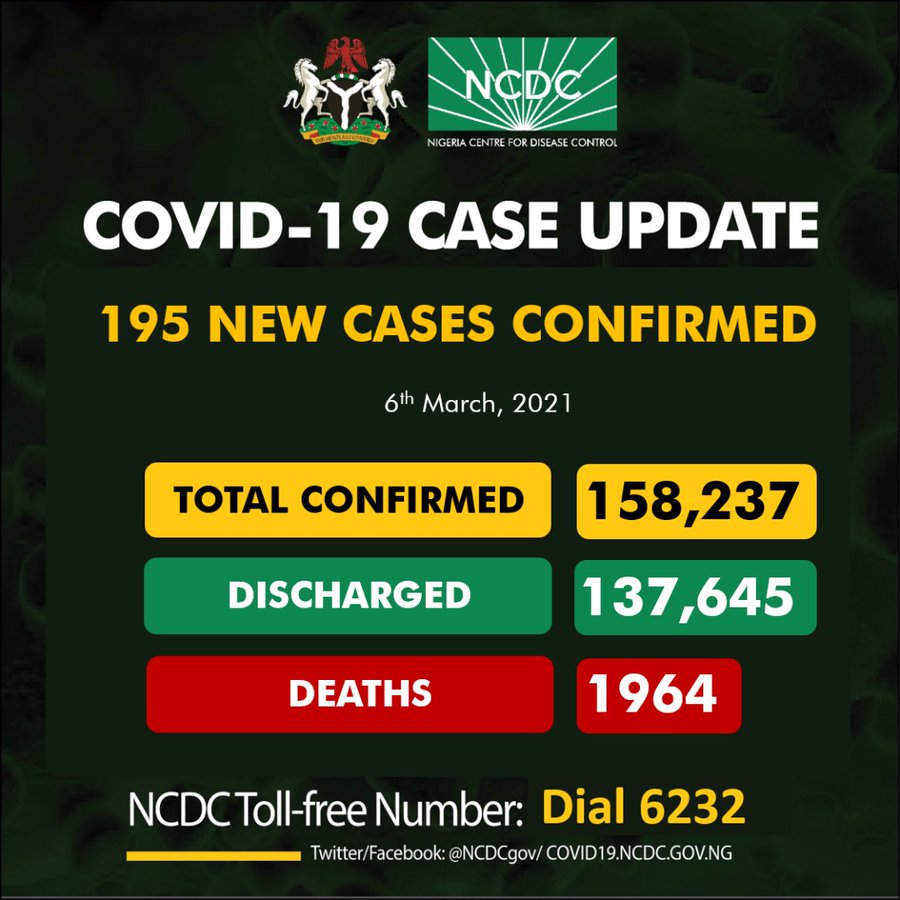 The Nigeria Centre for Disease Control (NCDC) recorded 195 new COVID-19 cases in Nigeria on Saturday, bringing the total number of infections in the country to 158,237.

The public health agency disclosed this on its official Twitter handle.

It said that 10 deaths were recorded in the day under review, bringing the total number of deaths to 1,964 since the first case of the pandemic was confirmed.

It further said that a total of 137,645 cases had been discharged after full recovery.

NCDC said that Plateau recorded three cases, like Ekiti, while Niger and Ogun recorded two cases each. Zamfara recorded one.

Besides that 195 new COVID-19 cases recorded in Nigeria on Saturday, the NCDC said that 620 people were discharged on the review date, and explained that among those discharged were 282 community recoveries in Lagos State managed in line with guidelines.

Meanwhile, the Edo State Government has urged residents to support the government in reducing community transmission of coronavirus (COVID-19) by ensuring compliance with the state’s preventive protocols to check the spread of the second wave of the pandemic.

The Incident Manager blamed the steady rise in the number of confirmed cases in the state on poor compliance with government’s guidelines to contain the infectious disease.

Obi while reassuring the government’s commitment to curbing the spread of the virus, urged citizens with COVID-19 symptoms to contact the Edo Emergency Operation Centre on this toll-free number: 08003625000 for assistance.

COVID-19 Vaccine: No Side Effect On Buhari – Presidency