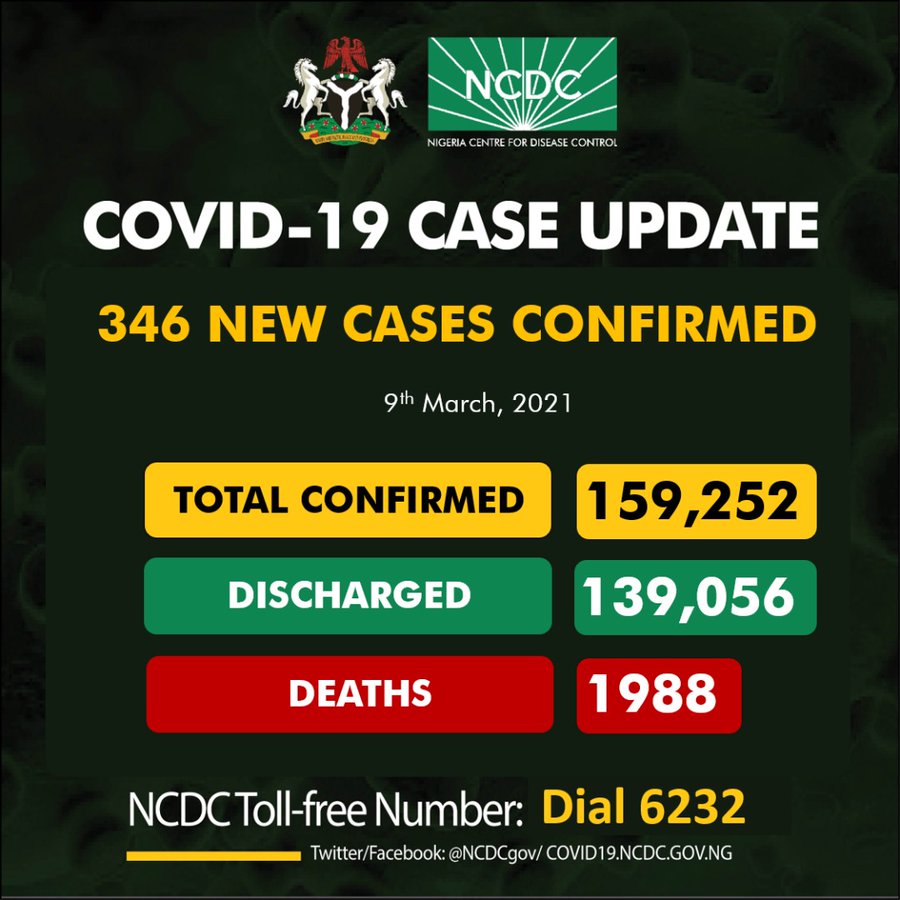 The Nigeria Centre for Disease Control (NCDC) has recorded 346 new COVID-19 cases in Nigeria taking the total number of infected people in the country to 159,252.

The NCDC gave the figures on its official Twitter handle on Tuesday.

The News Agency of Nigeria (NAN) also reports that six people died from COVID-19 related ailments in the last 24 hours, taking the death toll to 1,988 and the number of patients who have recovered from the disease put at 139,056.

The NCDC stated that the 346 new infections were recorded in 17 states and the Federal Capital Territory (FCT) in the last 24 hours.

The NCDC stated that Lagos recorded the highest number of new cases with 86 infections on Tuesday.

Bauchi followed closely with 64 cases and Kaduna and Kwara in third position reported 26 new cases each, while the FCT confirmed 24 infections, Rivers reported 23 and Plateau had 22 cases of the virus.

The NCDC said that 554 people have been successfully treated and have been discharged from different isolation centres in the last 24 hours.

Besides the 346 new COVID-19 cases in Nigeria, the NCDC, said that the discharges on Tuesday, March 9, 2021 included 170 community recoveries in Lagos State and 83 in Kwara managed in line with guidelines.

The NCDC said that a multi-sectoral national emergency operations centre (EOC), activated at Level 3, had continued to coordinate the national response activities in the country.

NAN recalls that the country has tested 1,601,396  people for the virus since the pandemic outbreak in the country last year. (NAN)

Lagos Receives Own Share Of COVID-19 Vaccines From FG