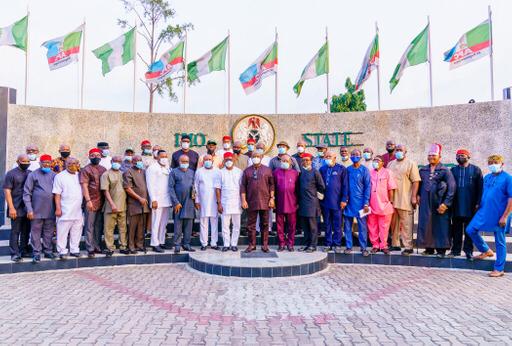 They did on Wednesday when they paid a solidarity visit to the Governor Uzodimma at Government House Owerri.

The leaders who were led by the Speaker Imo State House of Assembly,  Rt. Hon. Paul Emeziem who is also from Okigwe Zone, were described as political deciders of election in Okigwe zone. They said having seen the good works of the Shared Prosperity Government of  Governor Uzodimma they decided to join the moving train to make Imo State better.

The Chairman of the group,  Rt. Hon. Stanford Onyirimba who is former Majority Leader Imo State House of Assembly said they came in solidarity with Mr. Speaker to express their readiness to work with the Governor after evaluating his various landmark achievements in his first one year in office.

Dr. Onyirimba assured the Governor and government on behalf of his colleagues of their readiness to mobilize the grassroot in Okigwe to appreciate the good works of Governor Uzodimma.

He particularly eulogized Governor Uzodimma on the flag-ship project of construction of the Owerri-Okigwe Road which they described as :a milestone that will help to improve on the life of Okigwe people economically.”

To them, the construction of the road will make it possible for the Governor to fastrack the completion and take-off of the Imo State School of Engineering at Umuna, the revitalization of the Avutu Poultry at Obowo and asked for the revamping of the Okigwe Zonal Water Scheme.

Receiving the Okigwe leaders, Governor Uzodimma expressed happiness that they came to synergize with him in the service of Imo people for the betterment of all and sundry.

The Governor said: “Party is important but governance is more expedient,” adding that, “this is why it is important that all well-meaning Imo men and women should join hands in the new process of renewal, recovery, reconstruction and rehabilitation to have a better Imo State.”

Governor Uzodimma thanked them for the decision to join APC, noting that most of them are Political gladiators of Okigwe extraction and Imo State in general.

He assured them of all rights and privileges while in APC, reminding them that every leader is respected in his own right.

Receiving the group who were mainly of PDP extraction, Chairman of APC in Imo State,  Chief Marcelanus Nlemigbo expressed gratitude to Hon. Emeizem for “bringing his wealth of experience to bear on his people to join APC at an auspicious time like this, when the party is undergoing registration and revalidation.”

He asked them to quickly register as that will make them prompt full-fledged members of the party with all rights and privileges.

Prominent among those who came on the solidarity visit were – Rt. Hon. Patrick Ndubueze, Chief Tony Black Nduka, High Chief (Dr.) Zeek Martins Nnadozie, Chief Emeka Okoronkwo, Chief Livinus Okeh (world biz) among others. Those who joined the Governor to receive them include: the Deputy Governor of Imo State, Prof. Placid Njoku, the Secretary to the State Government, Chief Cosmas Iwu, the Chief of Staff Government House, Barr. Nnamdi Anyaehie, State Vice Chairman of APC, Hon. Dominic Uzowuru among others.