How Ogun Villagers Went Through Forest To Escape Killer Herdsmen 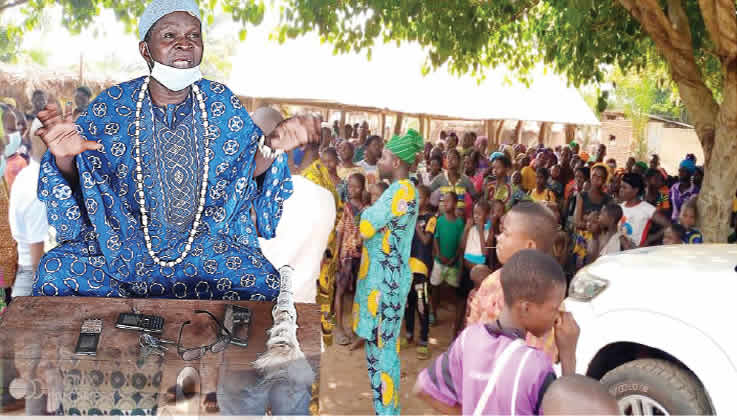 Villagers from Yewa-North in the Imeko-Afon Local Government Area of Ogun state have narrated how they embarked on deadly trip through the forest into Benin Republic to escape killer herdsmen.

The villagers told Saturday PUNCH that they had to fled from their homes to the Republic of Benin when they could no longer endure the incessant attacks by criminal herdsmen, who have been raping, killing, abducting and destroying their farmlands with cattle.

25-year-old, Olufunke Kangbe narrated how she ran for her dear life with pregnancy in the night to seek refugee in Benn Republic.

I forgot that I was pregnant when I ran from danger. I ran from Asa village in Ogun State at night when Fulani herdsmen invaded our village and started killing people. The following day, I was rushed from Eegelu where I slept to this hospital (Sante De Sante) in the Republic of Benin and was later delivered of a baby there by the nurses on duty.”

She added “I was taken to the hospital when I felt labour pain. I was first taken to Agbele in the country when herdsmen invaded villages in Yewaland. There were many that ran away. We could not sleep in our homes and had to move to Eegelu. They burnt our house. We had no home again when we fled to the country.’’

61-year-old Madelene Akindele who now seeks refuge in Eegelu camp in Benin republic said, “We trekked from Agbon to Eegelu through bush paths. Some took motorcycles but many of us went on foot and it took us two days while some spent four days. The people received us warmly. Some of us are from Agbon and there are also some from Asa, Kodera, Ibeku Moro and Iselu. I sold bean cakes and roasted corn in Asa. Herdsmen killed four people and burnt houses in the area. We, therefore, felt that as the attacks continued, it was better for us to seek protection somewhere else.

“I have not started working or doing anything in this country. I only depend on people. I don’t know when I will return home but once there is peace, I will consider it. The government should ensure peace in the villages. We don’t want to go home and rush back to this place because of insecurity. My husband was in Agbon. He was taken to Oja-Odan. My children are in Agbon and we talk often. We arrived in the Republic of Benin together but they had returned home.”

Olufunmilayo Olabisi, said she left her village Asa to seek refugee at Igana in Benin Republic after escaping death by a whisker.

She said “They shot indiscriminately in the communities and torched houses. They killed people and we had to run away. We walked to this country (Republic of Benin). We are hungry here but afraid of death back home. We want to return home but the Ogun State government should make our villages peaceful.’’

Another lady, Ewunmi Jeremiah said “We are in Igana in the Republic of Benin. I was a farmer back home. We had started planting for the new season when the attacks started. We are fed up and want to return home but we need security in our villages. It wasn’t easy getting to the country because we trekked and some took motorcycles.’’

The villagers are he Ogun State government to provide them shelter and security for them to return home.

Victims Struggling To Move On A Year After Abule Ado Explosion

How Man Killed Commercial Sex Worker He Planned To Marry