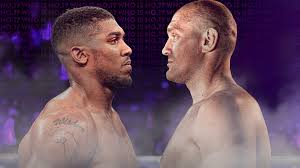 After months of arduous negotiations between competing promoters and rival champions, the contract for a two-fight deal between Tyson Fury and Anthony Joshua to unify the heavyweight titles has finally been signed.

“We’d like to get a site deal confirmed in the next month,” said Eddie Hearn, managing director of Matchroom Sport, Joshua’s promoter. “The hard part is always getting everybody to put pen to paper. But this was a major effort from all parties to get this over the line. You had rival promoters, rival networks and rival fighters.”

With the terms of the deal now agreed, principals can solicit offers from prospective sites.

“I actually feel we’ve done the hard part,” Hearn said. “Speaking for myself, Anthony and his team at 258 management [258 MGT], I know how hard we’ve worked hard these last couple of months and I just feel that this fight is so big it’s not a difficult sell. We’ve already had approaches from eight or nine sites. The offers have come from multiple countries in the Middle East, from Asia, Eastern Europe and America.”

The smart money, however, continues to be on the Middle East, where Hearn secured a site fee in excess of $40 million to promote Joshua’s 2019 rematch with Andy Ruiz in Saudi Arabia. The need for a huge site fee becomes particularly acute with seating restrictions and businesses still reeling from COVID, as Middle Eastern countries are seeking less in attendance than favorable publicity.

“This is the biggest fight in boxing and one of the biggest sporting events in the world,” Hearn said. “It will be a major, major win for a country that wants to showcase itself.”