Meet Woman Who Forgets Who Her Partner Is If She Laughs 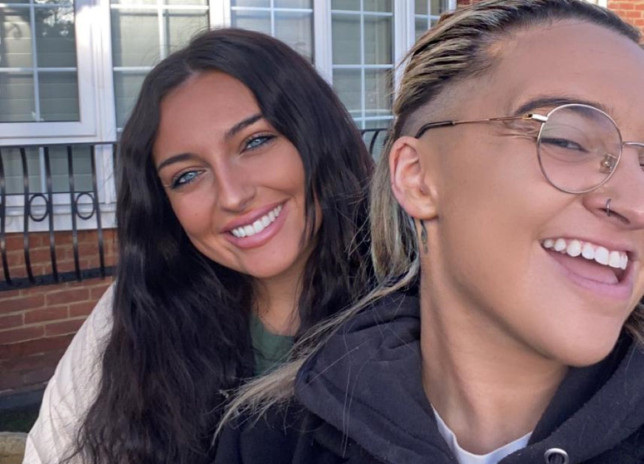 TikTok star Megan Jackson has a rare condition that causes her to repeatedly forget her own partner – who has to write a diary to remind her of their relationship.

Megan suffers memory-wiping seizures whenever she gets too happy, after developing functional neurological disorder [FND] five years ago.

The horrifying condition affects every aspect of the 21-year-old’s life, meaning even her favourite sitcoms have to be banned as they can trigger the condition from laughing too much.

The unemployed vlogger is also unable to receive surprising news as it can cause severe memory lapses – meaning a future marriage proposal could be off the cards too.

Her sympathetic partner Tara Sorkin, 22, has even been forced to write a diary for Megan and shows her pictures or plays their favourite songs to help jog her memory.

Many of Megan’s happiest moments in life have been ruined by the condition – as even simple pleasures such as the excitement of winning a bet on the Grand National sparked a lapse and she forgot she’d even won.

Now Megan has launched a GoFundMe page in the hope kind strangers will donate towards her seeing a specialist to put an end to her daily struggles – otherwise she faces a long waiting list to see an NHS neurologist.

Megan, from Leeds, West Yorkshire, said: ‘It’s so depressing. I have seizures pretty much every day. ‘I only need to laugh then I have a fit. It affects every part of my life.

‘I can cope with the seizures because I really don’t have a clue what’s going on when they’re happening, but it’s the memory loss [too].

“‘sometimes I forget who my girlfriend is and that’s terrifying. Sometimes I forget family members. It’s like my memory lapses. ‘The most bizarre thing is I can wake up and forget I like certain foods. I’ll buy something then the next day think “why did I buy this – I don’t like that?”.

‘The worst part is when I wake up from a seizure and have no feeling in my legs. I can be stuck like that for days and I have to wee in a cup or throw myself off the bed and take myself to the toilet.

‘It’s so sad that at 21, I have to make myself miserable – but not too miserable – so I don’t have a fit.’ When she turned 17, Megan spent months being rushed to A&E by mum Sanchia Jackson, 45, after suffering up to 35 seizures a day – with some leaving her completely unable to walk or talk.

After a referral to a neurologist, Megan was diagnosed with FND and offered cognitive behavioural therapy [CBT], but she soon realised it was bound to fail as she forgot the session.

Megan said: ‘The [seizures] were so scary. They explained it’s like a computer with too many windows open, and once you open another window, it just crashes. That’s why my body has a seizure.

That’s how it deals with stress. ‘They said to me I have to be on a waiting list to have CBT. I finally got my appointment for that but I was only seen once.

‘Every time I had a seizure, which was every single day, my memory would restart, so I’d forget the appointment I’d just had. ‘I’ve not had any help since and that was five years ago. I’ve been left in the wings for so long.’

A devastating reality for Megan is her relationships are hugely affected by her condition – meaning her first girlfriend Tara can never buy her big presents or surprise her for fear of triggering an episode. After talking about their future together, Megan imagines a marriage proposal would cause her to be ‘out like a light’ – meaning it could cause another a memory lapse.

Megan said: ‘Part of my illness has probably stemmed from not being myself. I only recently came out as a lesbian since meeting my current girlfriend. ‘When I met her, my fits were way worse because I knew I had to tell my family. It would just come out in my fits otherwise.

We’ve only been together a few months and we’ve been through way too much. We shouldn’t have been through this amount of trauma and I’ve forgotten her at least four times. ‘She’s really good with it.

She writes diaries to me every day and keeps them in my notebook on my phone. It’s like 50 First Dates. Everyone refers to it like that.’ Tara has to gauge Megan’s reaction to songs or her diary, working out whether her girlfriend even remembers her name after a seizure. ‘Sometimes if I come round and someone says “this is your girlfriend, Tara”, I’ll be like “what the hell – I’m not even gay”.

I think no one knows [my sexuality] because I’ve forgotten,’ says Megan. On several occasions, Megan’s emotions have triggered seizures, meaning some of the most joyful times in her life have been ruined by her fits. After these draining episodes, Megan sometimes develops tics or slurred speech. On other occasions, she has lost her voice completely.

Megan said: ‘Heightened emotions cause me to have these seizures. ‘Sometimes it barely looks like I’ve had a fit, but for some reason my hand stops working, [or] I’ll have slurred speech or stammer. Woman has rare condition that makes her forget her partner

‘Whenever I get stressed, it comes out in weird ways. If you try to suppress it it makes it worse, so you’ve got to ride it out. ‘There are certain programmes I can’t watch because they’re too funny or too sad.’ Off limits for Megan is This Country, which her family have been asked to not put on when she’s around as it makes her laugh too much.

A winning bet on the Grand National when she was 18 also caused Megan to pass out, but something as everyday as a fire alarm sound can also spark the memory lapses.

It’s got to the point now where Megan has had to leave jobs because her seizures become so sever, and once she didn’t even remember leaving one employer and tried to go back after quitting.

By launching her TikTok, which now has more than 280,000 followers, Megan has committed herself to helping others with invisible disabilities – specifically FND.

Megan said: ‘The reason I set up my TikTok account was because this generation is so influenced by social media. ‘When you look at my Instagram, you’d think I’m a regular 21-year-old girl who goes out, sees her friends, goes on holiday, when in reality, I’m extremely disabled and I don’t get to do as many things as I’d like to.

‘I can’t drive, I can’t go anywhere on my own, I can’t bath without being watched. ‘I wanted to make more people aware of hidden disabilities. I want to be a voice for others going through what I am. It gave me a purpose.’ You can donate to Megan’s page here.